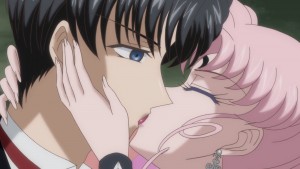 The latest English dubbed episode of Sailor Moon Crystal is now available to view on Hulu and Neon Alley. This week on Act 24, Attack – Black Lady, Chibiusa continues being the evil Black Lady. She has enslaved her father to make him her boyfriend! 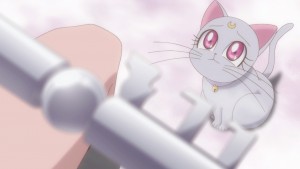 With things getting real Sailor Pluto must abandon her post and to do so… she leaves Diana in charge. This update is being scheduled to be posted automatically while I’m on vacation in Italy. To do this I had to leave someone at my work in charge to cover my duties, and I was lucky to have someone well versed in my duties to do so. What exactly is part of Sailor Pluto’s job that Diana is able to do? Does she get paid for it? Oh well. At least we get a look at young Sailor Pluto this week! 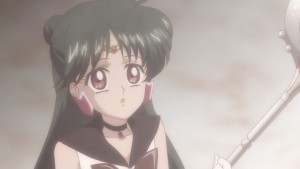 Next week is Act 25, Showdown – Death Phantom. The season is almost done with just a couple of episodes left. Big changes are in store for Chibiusa!

The next English dubbed episode of Sailor Moon Crystal will be released on Hulu and Neon Alley this Friday at 9pm Eastern Time. Act 24, Attack – Black Lady, continues with Chibiusa being Black Lady and making out with her dad.

We will get real cute moment with Sailor Pluto this week as we see a flashback to when she was young. Sailor Pluto will also give Diana a part time job which makes one wonder what her actual job is if a tiny kitten can do it. 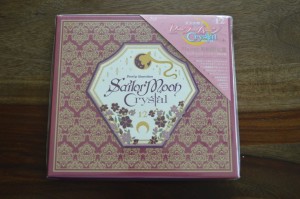 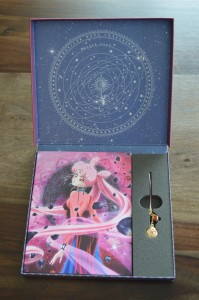 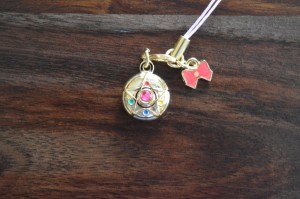 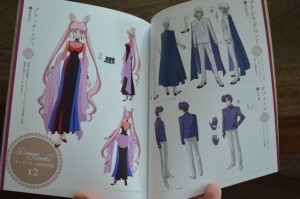 END_OF_DOCUMENT_TOKEN_TO_BE_REPLACED

The latest episode of Sailor Moon Crystal, Act 24, Attack – Black Lady, is now available to stream on Crunchyroll, Hulu and Niconico. This week we celebrate Father’s Day weekend as Black Lady continues to make out with her father Tuxedo Mask as she and Wise Man attack Sailor Moon, the Sailor Guardians and the Earth itself. 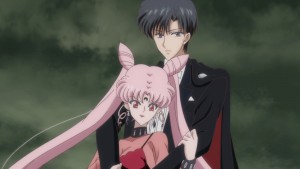 As with Act 23, we focus mainly on Black Lady in this episode. She is controlling Tuxedo Mask, who is now going by his evil name of Endymion, to make him her boyfriend. This seems a bit creepy but, as mentioned in last week’s review, this is Black Lady’s odd way to dealing with the feelings she had as a child now that she has unexpectedly and unnaturally aged and acquired a great amount of power. 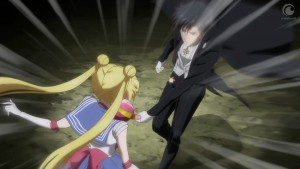 Endymion is full on evil now, attacking Sailor Moon with her own attack item. At first this upsets her. Mamoru using the item that they made together against her. She then notices that Chibusa’s possessive behaviour is like how she was feeling earlier in the season, when Usagi was jealous of Chibiusa monopolizing Mamoru’s time. She doesn’t see Black Lady as an evil enemy but as a jealous young girl, and she tries to plead with her. 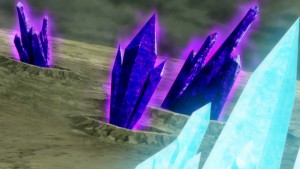 This doesn’t work well. Black Lady brings a third Evil Black Crystal to Earth which promises to kill everybody. So who’s left on Earth anyway? Crystal Tokyo is pretty much destroyed but we don’t see much of the rest of the planet. Perhaps there are a bunch of people still living a nice life in Canada! 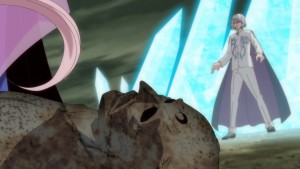 Prince Demande and Saphir are being controlled as well, however Prince Demande’s powers allow him to break out of the mind control. He is attacked by Saphir, who is under Wise Man’s power, and in defending himself he kills him. This does not explicitly happen in the manga. Prince Demande apologizes to his brother but only attacks Wise Man. We never actually see what happens to Saphir beyond this point in the manga, but in Sailor Moon Crystal there is little doubt he is dead. Prince Demande then kills Wise Man revealing an old already dead corpse, but it turn out this was not really Wise Man’s actual body! 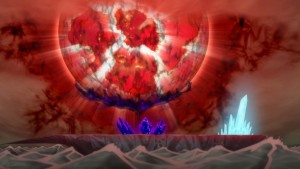 Wise Man’s seemingly final form, as revealed at this point in time, is planet Nemesis! Well that’s kind of weird! The old corpse in a cloak was actually just a ruse, the real deal is this evil entity that is the planet Nemesis. Black Lady brings it through a portal down on top of Crystal Tokyo. This scene is reminiscent to the film Transformers: Dark of the Moon where Cybertron is brought to into Chicago through a large portal. My first thought then, as was my first thought when watching this episode, is what a terrible impact this would have on the Earth’s gravity. The Moon is far so it’s effects on us are relatively small, though the tides are not completely insignificant. Put a planet a few hundred feet from another planet’s surface and it will be a whole different story. This seems like a non issue however, as Nemesis is incredibly tiny. We can see most of it coming out of the portal with Crystal Tokyo under it and all considered it would not be bigger than most mountains. I certainly expected the planet to be much larger than this. The actual planet X which Nemesis was inspired by was originally believed to exist due to gravitational anomalies in our solar system which were later explained. A body this small would not have any such strong gravitational effects as it’s smaller than most asteroids and comets.

We get a bit of Sailor Pluto backstory, as we get a look at her when she was quite young. The original Queen Serenity, Princess Serenity’s Mother, speaks to her in the distant past. This would have to be taking place on the Moon in the years of Silver Millennium. She is given three rules to follow! First, don’t move time. Let’s assume this means time travel. She does this all the time, and is why we’re in this mess in the first place. Second, guard the door! She stops doing that in this episode. The third and most important is not mentioned, but we’ll learn all about it in the next episode as she breaks it.

Diana, the adorable kitten, plays an important role in this episode. Sailor Pluto abandons her post, and who can blame her after spending thousands of years in the same clothes standing without a break watching a door, and puts Diana in charge! Could Diana possibly do a worse job than Sailor Pluto who has broken every rule imposed on her? Sailor Pluto’s job is to guard the Space-Time Door, and as far as we’ve seen in this story arc every person who she has encountered has eventually been allowed to travel through time. Why did the Black Moon Clan even need their own method of time travel? They should just have befriended the lonely Sailor Guardian and gotten their own Key of Space-Time to do whatever they want! Diana could literally do nothing and still do the exact same job that Sailor Pluto has this season! One also has to wonder how things go following this episode. We never get an update on Diana’s temporary door guarding duties but we do know that she is never relieved and yet she will later show up in the past. Is there a new guard that we’re not aware of or is Sailor Pluto replaced with a scarecrow or something? 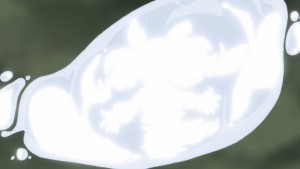 Up next is Act 25, Showdown – Death Phantom. Things are really starting to wind up as Sailor Pluto breaks her final rule and pays the ultimate price to protect the Earth and her friends. Chibiusa will struggle to free herself from Black Lady, who is really her. Will all that work out? 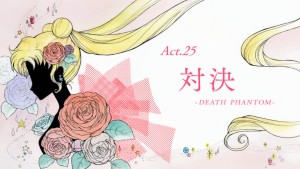 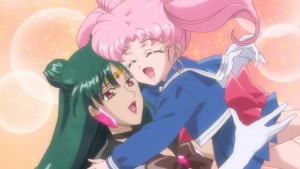 Keep reading for more screenshots from this episode and the next episode preview for Act 25.

END_OF_DOCUMENT_TOKEN_TO_BE_REPLACED 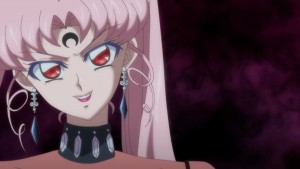 The next episode of Sailor Moon Crystal, Act 24, Attack – Black Lady, will be available this coming Saturday on Crunchyroll, Hulu and Niconico. The episode will be available at 7pm Japan Standard Time which is 6am Eastern Time, 3am Pacific Time. 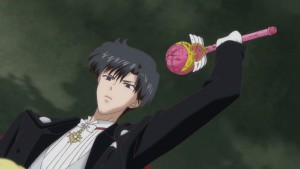 This week we get more of a look at Black Lady, who is attacking our heroes and trying to destroy the Earth! She will continue to make out with her father, Endymion, who is brainwashed into attacking Sailor Moon with her own weapon! We’ll learn more about the true identity of Wise Man and hopefully get a look at young Sailor Pluto. 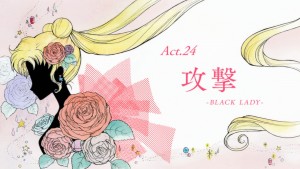