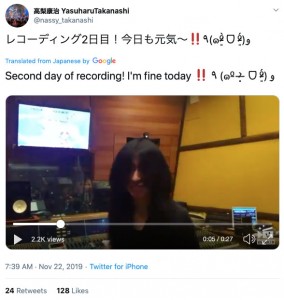 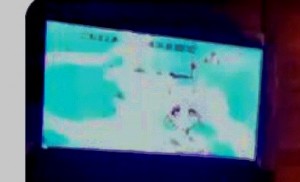 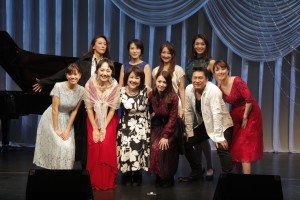 We had previously reported on the then upcoming Sailor Moon x Akiko Kosaka 45th Anniversary Music History Supported By Pretty Guardians concert. At the time there was still quite a bit that was unknown about the concert which took place on November 9th and the 10th, a Saturday and Sunday. One lucky reader was able to attend the November 10th performance and passed on his thoughts about the concert which I’m happy to share. I’ll be paraphrasing some of the highlights of his experience. 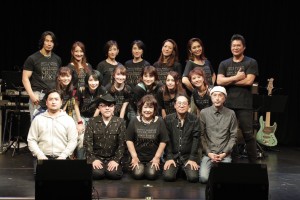 The concert took place at Quest Hall, which is located in Harajuku, a district in the Shibuya Ward of Tokyo, which is next to Minato, where Azabu Juban and most locations in the Sailor Moon manga take place. The venue housed a couple hundred people which is quite small compared to what would be used for something like a Sailor Moon musical. The audience was mostly composed of women who would have been old enough to be watching Sailor Moon in the 90s, though there were some younger fans as well.

The goal of this event was to celebrate Akiko Kosaka’s career. She has contributed a lot of music to the Sailor Moon musicals as well as the original Sailor Moon anime and Sailor Moon Crystal. This event seems to have been mostly focused on the musicals, though there were a few songs from the anime as well. Akiko Kosaka performed at the piano for the entirety of the concert, with her music being complemented by a keyboard, guitar, bass and drums. A full set list for both days was posted to the official Sailor Moon Twitter account. You can see those set lists below. 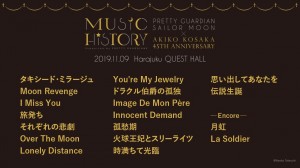 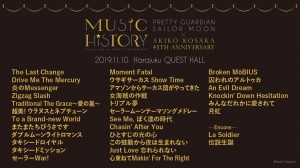 The performers were not in costume though they did wear Music History t-shirts for the second half of the performance. They moved about the stage acting out some of the songs with a small amount of dancing, using the space provided.

The highlights of the show mentioned were the performance of Triple Dreams, a song first performed as part of the 1995 SuperS musical Dream Warriors – Love – Into Eternity… It was also mentioned that Anza, the first actress to play Sailor Moon, and Hikari Ono, who performed a number of roles throughout many musicals, stole the show. The audience seems to have enjoyed the show immensely. 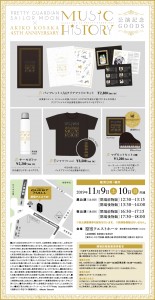 There weren’t a ton of products available at the show. A post on the Sailor Moon official site highlighted some of these, which includes pamphlets, magnets, shirts and water bottles. Artists were also selling some of their own merchandise which were in fairly limited stock. Those in the premium seats got extra merchandise which included a booklet of piano sheet music for three songs and a CD including piano versions of some Sailor Moon songs. In the past such items have been sold on Japanese auctions sites such as Mercari for very high prices.

It does not appear that the show was filmed, making a DVD or Blu-Ray release of this concert unlikely. Though it was not mentioned it is always possible that an audio recording was made for a potential future CD release.

Were any of you lucky enough to attend this concert? What are your thoughts on it? 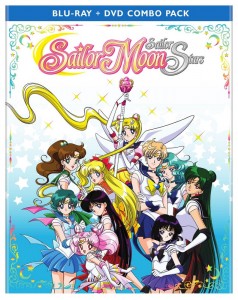 Have you gotten your copy yet? Did any of you wait until now to watch the fifth and final season? What did you think of the final episodes? If you’re looking to pick up any of the earlier sets you can support the site by ordering them from Amazon using these links.

END_OF_DOCUMENT_TOKEN_TO_BE_REPLACED

Yesterday we reported that a number of online retailers were offering Sailor Moon Sailor Stars Part 2 as a digital download but that it was not available on Amazon Prime Video. Though it was not listed along with the rest of the series, the final 17 episodes of the season are in fact listed on the site. Fans looking to buy these digitally from Amazon Prime Video can support the site by using the link below.

I don’t believe this is a new addition, but simply something I didn’t notice previously. When one looks at the Amazon Prime Video page for Sailor Moon it only lists up to season 501, Sailor Moon Sailor Stars Part 1. This is what I originally looked at to try to find if the new episodes were available. Part 2 is listed on a totally different page which is likely why I hadn’t seen it. 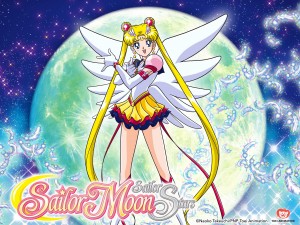 For those who’ve gotten the digital version, what do you think? If you’re still looking to buy the physical release on November 12th you can support the site by pre-ordering it using the links below. 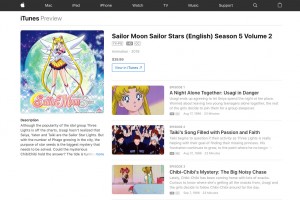