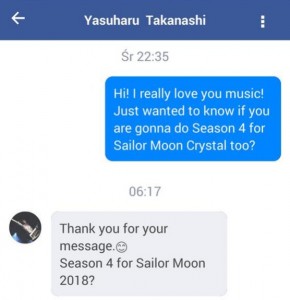 A couple of screenshots of alleged conversations with Yasuharu Takanashi, Sailor Moon Crystal’s music composer, are suggesting that Sailor Moon Crystal’s 4th season will be airing in 2018. People in the fan community are referring this as a rumour of further delays for the upcoming season. As rumours go, this one doesn’t seem to have much weight to it. I’m reporting this as it’s being discussed in the fan community and I wanted to weigh in on it’s legitimacy and not because I think there’s much validity to the rumour itself. Let us look at the evidence provided and consider how reliable the claim is. 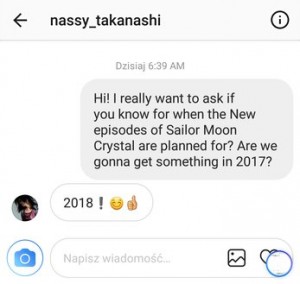 I originally saw this in a Tweet by Twitter user Chase the CHECH (@iHasMangic) who included two screenshots. The first is from a Facebook Messenger conversation. When asked if season 4 was coming he stated “Season 4 for Sailor Moon 2018?”. The question mark is a bit questionable. The profile image and name match that of Yasuharu Takanashi’s Facebook profile. The second screenshot is of an Instagram conversation. When asked about the possibility of a 4th season in 2017 he responds “2018! (smiley face) (thumbs up)”. Again the user name, in this case @nassy_takanashi, and profile photo match his Instagram profile. Since originally posting this I’ve been in contact with the user who posted this to Twitter and Adrian, the user who originally had these conversations. Adrian also posted these screenshots to the Pretty Guardians Facebook group and a post on the Genvid Forums. These include alternate screenshots of the same chats.

We can ask ourselves a few questions. Are these screenshots legitimate? Is Yasuharu Takanashi indicating that Sailor Moon Crystal is delayed until 2018? If he is, is such a claim a reliable indication that the series is indeed delayed? I can’t make any certain claims about the authenticity of these screenshots. One could easily fabricate something like this, but would they? If I were going to fake a screenshot I might attempt to make a more clear confirmation without confusing question marks and emoji, but then I’m not in the business of doctoring screenshots these days. With matching avatars it doesn’t seem out of the question that these are legitimate. Having seen a number of different versions of these screenshots and spoken to Adrian about it I don’t think there’s much of a reason to doubt the validity of these.

If they are indeed real screenshots, what is actually being said? The language is a bit confused but it does seem like Yasuharu Takanashi is indicating that, in his opinion, the series will be continuing in 2018. If this is indeed what he means, we can again ask ourselves if that is a reliable source. Yasuharu Takanashi composed the music for the first three seasons of Sailor Moon Crystal. It is entirely feasible that he will continue in this role if the show should continue, and we’ve received indication via the official Sailor Moon web site that more Sailor Moon Crystal is coming. As someone working on the show he may have an idea of the schedule. He may not as well. He may have been working on the show, be working on it now or be scheduled to work on it in the future and not actually have a specific idea of when the animation, voice acting and other production work will be completed and when the final distribution is scheduled for. If he did actually know when the show would be coming he may not be at liberty to disclose this. This chat isn’t a confidential discussions between professionals or close friends but rather a fans who reached out and got an answer.

Take it all with a grain of salt! If others weren’t reporting on this I wouldn’t have bothered to post about it myself but as it’s being thrown around I wanted to share it for context. There are a lot of ifs going on. If they all turn out we may be getting new episodes in 2018, but with so many unknowns I wouldn’t make any certain conclusions about this actually happening. I tend to only give consideration to information shared through official sources such as those posted on the Official Sailor Moon site. Even when we get information through official sources we’ve seen that such situations are likely to change anyway. For now the only official word we’ve gotten is that more Sailor Moon Crystal is planned and we have gotten no timeline of when this would occur.

As always if we hear anything official on this topic we will be sure to share it as soon as we can.