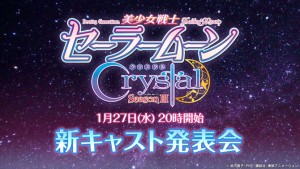 The official Japanese Sailor Moon site has referenced the upcoming Infinity story arc of Sailor Moon Crystal as “Season 3″ in a news posting about next Wednesday’s streaming event. Since the announcement of new episodes of Sailor Moon Crystal a semantic confusion has been gripping the fandom! Some referred to this third story arc as “Season 3″ while others called it “Season 2″, the first 26 episodes having only taken place over a year, it seems logical to refer to them as a single season. Further adding to the confusion Hulu refers to the first 26 episodes as “Season 1″ on their site. If they add the new episodes as “Season 2″, this could be a problem. I personally chose to follow the Japanese convention of calling it a 3rd “Phase”, intentionally avoiding the confusing term season, but now we are safe to officially refer to this as the 3rd season. Fear not! As always I will strive to be as unconfusing as possible in my posts.

As previously reported, the streaming event will take place next Wednesday January 27th at 8pm Japan Standard Time, 6am Easter Time, 3am Pacific Time on Niconico. The post on the site was to mention that Kotono Mitsuishi, the original voice of Sailor Moon, will be making an appearance at the event. We will keep you advised of any details which we learn on Wednesday.