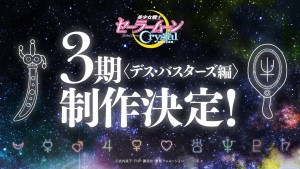 It’s official! Following the airing of the final episode of Sailor Moon Crystal on Japanese TV a new set of episodes was announced. This was immediately confirmed on the Official Sailor Moon Site and Twitter account. The image included with this announcement shows Sailor Uranus’s Space Sword, Sailor Neptune’s Deep Aqua Mirror and symbols for all 10 Sailor Guardians. The Space Sword and Deep Aqua Mirror are two of the Talismans that have some importance in this next story arc. Missing is the third Talisman, Sailor Pluto’s Garnet Orb. I guess we’ve seen enough of it with the New Horizons photos of Pluto at this point.

As expected this will cover the Infinity story arc for the manga which introduces us to Sailor Uranus, Sailor Neptune and Sailor Saturn as well as the enemies the Death Busters which includes Professor Tomoe, Kaolinite and the Witches 5. This is the equivalent to the Sailor Moon S season of the original Anime. Not a lot of details are included about the actual release schedule of these episodes. It seems likely that these episodes will once again be available to stream on Nicinico and to air on TV in Japan. We don’t yet know which of these will come first. Will we continue with the model of releasing online first, with a more traditional model of releasing on TV first or perhaps have a simultaneous TV and online release? We will have to wait and see as new details will be coming on the official site. 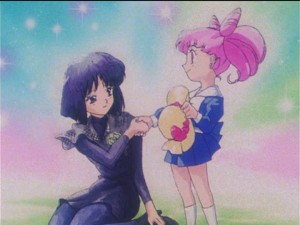 The Infinity arc of the Sailor Moon manga covers 12 acts by the new manga chapter numbering which was used for Crystal. This will likely mean 12 episodes in this story arc. The Dream arc, which is the equivalent of the Sailor Moon SuperS season of the original anime, covers an additional 11 episodes. If another year of the show was coming we would likely get both of these arcs. No such details were included in the press release which is no surprise as the Black Moon arc was not announced until late in the Dark Kingdom story arc of Crystal. At this point we don’t know how many more episodes are being planned. If we get that number we should be able to make a reasonable prediction about how many arcs that will cover. 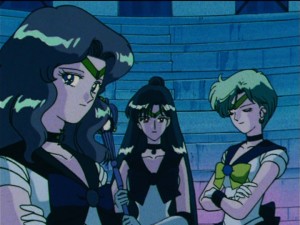 The Japanese announcements are breaking the story arcs into phases, with the Black Moon episodes being referred to as the second phase and this as the 3rd phase. Some also use the term season though with the first year of Sailor Moon Crystal covering two story arcs and arguably being considered one season this naming convention can be a bit confusing. Is this season 2, the second year of the show, or season 3, the third arc of the show? Is the term season even relevant to a show who’s primary method of distribution was online?

The press release also noted that a rebroadcast of Sailor Moon Crystal will begin next Monday starting with the Dark Kingdom arc.

Note that all but the first image in this post include art from the original Sailor Moon anime and not Sailor Moon Crystal.

28 thoughts on “A new season of Sailor Moon Crystal has been announced and will feature Sailor Uranus, Neptune and Saturn”