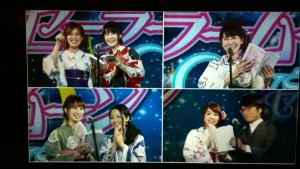 There was a live streaming event this morning to celebrate Usagi and Chibiusa’s birthdays which take place on June 30th. Fans were hoping for some sort of announcement of new episodes at this event but no such thing took place. At this point we have only two more episodes of Sailor Moon Crystal which remain in the second phase which is currently airing and no new episodes beyond this have been announced. Act 25 will air on July 4th and Act 26, the final episode currently planned, will air on July 18th.

Should any new episodes air they would begin on August 1st given the current schedule, and such episodes would cover the infinity arc which introduces us to Sailor Uranus, Neptune and Saturn. With no new episodes announced to date it seems quite possible that no new episode will be airing on that day. There is always the possibility of a break in the release of episodes leading to a new season at a later point in time. At this point we don’t have any confirmation one way or another as to whether the series will be renewed or canceled.

The event was blocked outside of Japan but it does not seem like there was much to miss. The cast of Sailor Moon Crystal was there as they recapped older episodes and read excerpts from the manga. This event was not really intended to announce any news but fans were still hoping for something.

As always should any new information become available about new episodes of the series we will share it with you.