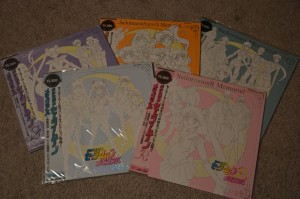 July 10, 2012 – Last Friday, a special event was held to commemorate the 20th anniversary of Sailor Moon. As the U.S. publisher of Sailor Moon, Kodansha Comics is pleased to provide a complete report of the event and the special announcements made there.

On July 6, 2012, at 7:30pm in Nicofarre in Roppongi, a district in Tokyo, the Sailor Moon 20th Anniversary Special Event welcomed back the voices of Usagi Tsukino/Sailor Moon, Kotono Mitsuishi, and Mamoru Chiba/Tuxedo Mask’s Toru Furuya in conversation with Fumio Osano, the editor for Naoko Takeuchi’s magical girl classic hit.

After 20 years, their reunion revealed a few secrets behind the anime, such as a never-before-mentioned trip to a hot springs resort, and why the anime and manga began so close together. Mitsuishi also confessed that she worked very hard as Sailor Moon because she was her first main character role.

Simultaneously in at Japan Expo in Paris, Momoiro Clover Z took the J.E. Live stage. They appeared in Sailor Moon costumes and performed the anime’s opening song ‘Moonlight Legend’ to original choreography. It was live-streamed worldwide.

After the performance, Shiori Tamai, a member of Momoiro Clover Z, announced the production of a new Sailor Moon anime series. A storm of applause rose from the audience. Kanako Momota, the leader of Momoiro Clover Z, also announced that they would sing the new theme song. Momota commented that they would do their best in order to deliver their voices to everyone around the world. As they wrapped up, Momota asked if she could strike Sailor Moon’s famous pose with Mitsuishi quoting Sailor Moon’s battle cry, and ended the sensational evening with Sailor Moon’s famous line, “In the name of the moon, I shall punish you!”

In Nicofarre, praise and cheers for the renowned voice actors and Momoiro Clover Z, as well as astonishment at the new announcement, lit the live monitor before Takeuchi-sensei herself gave her thoughts about the new Sailor Moon anime to end Sailor Moon’s 20th Anniversary Event.

Along with the announcement of a new anime, the Sailor Moon Project stated that a new 10-volume collector’s edition of the manga will be released monthly in Japan beginning in October. These new volumes will be faithful reproductions of the stories, including color pages and special pages in celebration of the 20th anniversary. A collector’s version Codename: Sailor V will be released as well.

A memorial DVD collection of the original Pretty Guardian Sailor Moon anime will also be released. Each volume will highlight on a different character in the series which aired from 1992 to 1997. One volume per guardian will be released monthly beginning in October 2012 in Japan.

The new anime series is stated to debut in Japan in the summer of 2013.

About Kodansha USA Publishing LLC
Established in New York in 2008, Kodansha USA Publishing (KUP) is a subsidiary of Kodansha, Japan’s largest publisher. KUP’s first works under the Kodansha Comics imprint were Katsuhiro Otomo’s Akira and Masamune Shirow’s The Ghost in the Shell. KUP has expanded their catalog to include such titles as Fairy Tail by Hiro Mashima, Shugo Chara by PEACH-PIT, and Sailor Moon by Naoko Takeuchi, the highest selling manga in the U.S. in 2012. Kodansha Comics is distributed by Random House Publisher Services.
http://www.kodanshacomics.com