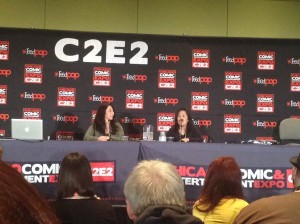 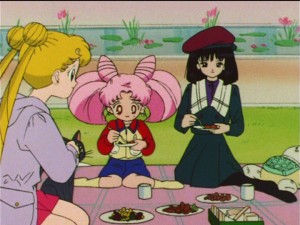 The two latest episodes of Sailor Moon S were added to Hulu and Neon Alley yesterday. This week we got episodes 116 and 117 which once again focus mainly on Hotaru as her friendship with Chibiusa deepens. 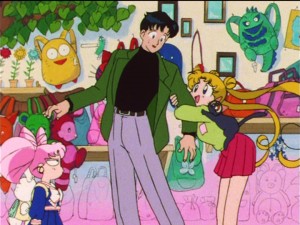 Episode 116, Sunny Skies After a Storm: A Friendship Dedicated to Hotaru, is all about a fun picnic. It’s fitting that we just got an episode of Sailor Moon Crystal this past weekend which shows how Usagi understands why Black Lady is possessive of Mamoru and recalls the fault in herself for feeling the same way but here in the anime no such revalation has taken place. Usagi is completely jealous of Chibiusa and Mamoru, as always. The whole gang, Usagi, Mamoru, Chibiusa and Hotaru, go to a lovely garden for a picnic. The random dude that works there is the target of the Daimon. What a coincidence that this was the exact place Sailor Moon was! Fighting ensues and Hotaru has a total freakout moment where she gets all glowy eyed and attacks the monster. If I didn’t know any better I’d say there is certainly something up with this girl! 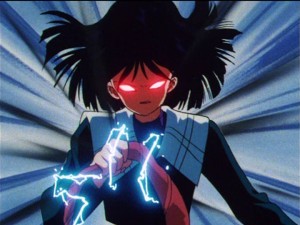 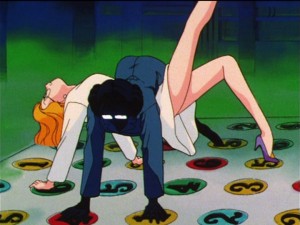 Episode 117, Higher and Stronger: A Cheer from Usagi, is a pretty silly one. An early scene has Mimete and some yet unshown members of the Witches 5 playing Twister. It isn’t really Twister though, as a real Twister board has a 4×6 pattern of coloured circles with all of the same colour in a row. This board has randomly dispersed coloured circles with numbers, but still has the player putting a hand or foot on some specified dot. The target for this episode is a runner named Shun Hayase who Hotaru is infatuated with. He was sick when younger and was able to overcome it, and Hotaru hopes to be able to do the same. In the original dub of this episode the runner’s English name is Sean Hayes. This is meant to be the closest English approximation to the name Shun Hayase, which I think fits. This seemed ridiculous to me as I watched the episode as Sean Hayes is a prominent American actor best known for playing Jack in the TV series Will and Grace. This seems like a total coincidence however as Shun Hayase’s appearance in the original Japanese version of this show predates Will and Grace by a number of years. Inspiration is impossible, barring time travel, and if the creative talents behind Sailor Moon had time machines Sailor Moon R would have made more sense. The dub would have been recorded once the series was airing and popular, so there may have been a bit of a joke intended with the name adaptation which sounded close enough. Hatoru gets to meet her idol while Chibiusa does an adorable cheer, but he gets his Pure Heart ripped out by Mimete’s monster. 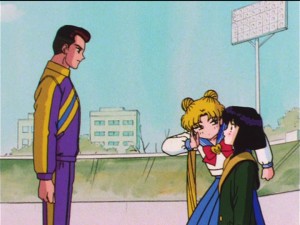 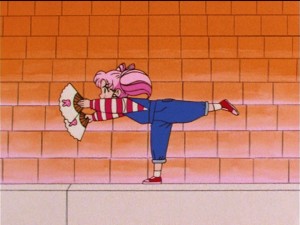