A single day Sailor Moon convention will be taking place in Toronto next month on September 27th. Toronto Sailor Moon fans should be sure not to miss it. The event is being put on by Emily from Moon Chase! and will feature special guest Roland Parliament, the voice of Melvin and voice director for the first 65 episodes of the original English dub of Sailor Moon and Ron Rubin, the voice of Artemis the cat throughout the series. As described on Moon Chase! and the Facebook Event for the page, the event will include: 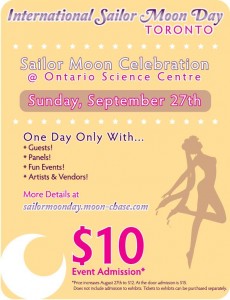 There will be a lot to keep a fan busy with a number of panels, a vendor area and craft area. Tickets are currently only $10. The price of tickets will be going up tomorrow, August 27th, so get your tickets now. If you didn’t get a chance don’t worry, they are only going up to $12. Entry into the Ontario Science Centre exhibits must be purchased separately for those who are interested in them. I visited the Ontario Science Centre last summer and found there were a lot of interesting exhibits there which are worth checking out.

Along with your ticket you can order a $2 International Sailor Moon Day wrist band which is exclusive to this event. The event carries some Sailor Moon Day branding as it was originally planned for Sailor Moon Day earlier this month before being delayed. 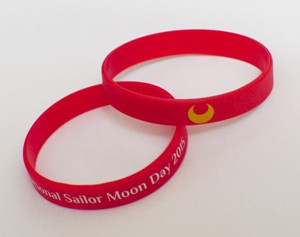 Roland Parliament recently wrote the book Sailor Moon Reflections which recounted many memories from his time recording Sailor Moon. Though I never got a chance to formally review the book I did read it and found it to be fantastic. It is a very interesting take on the history of Sailor Moon that any fan of the original dub should check out.

Saturday afternoon at 4pm Emily from the Moon Chase Sailor Moon News blog will also be running her Sailor Moon Merchandise panel in which she talks about all kinds of licensed Sailor Moon items from Japan and here in North America.

Saturday evening at 6pm and 8pm and Sunday morning at 11am Roland Parliament, the voice of Melvin and voice director for the first 65 episodes of the dub, will be reading excerpts from his new book Sailor Moon Reflections, The inside story of the original recordings of the English version of Sailor Moon. He will have a limited number of copies of the book for sale at the convention.

Sunday afternoon at 3pm will be the Sailor Moon Now and Then panel featuring both voices of Artemis, Ron Rubin and Johnny Yong Bosch. This panel will discuss how much has changed throughout the series and discuss Sailor Moon Crystal. Emily from Moon Chase will also be hosting this panel.

These are all the Sailor Moon events officially listed but there will be a lot more going on at the con including a lot of Sailor Moon cosplayers! Toronto Sailor Moon fans should be sure not to miss this one!

Roland Parliament, who supplied the voice of Melvin and was the voice director for the first 65 episodes of the DIC dub of the Sailor Moon anime, will once again be appearing at Unplugged Expo at the Chestnut Conference Centre in downtown Toronto September 27th and 28th.

Roland Parliament will be promoting his upcoming book, Sailor Moon Reflections: The inside story of the original recordings of the English version of Sailor Moon. This book was originally announced at Unplugged Expo last year at the Sailor Moon 20th Anniversary Voice Actor Panel which we posted on our site. As voice director and a voice actor for the series he gained a ton of insight into the recording of the show and will be sharing stories and photos of the behind the scenes moments recording Sailor Moon. You can pre-order the book from the official web site.

You can also check out Roland Parliament in Parliament Funkadelic, the latest episode of the Anime News Network Podcast ANNCast, in which he talks about the book and his time on the show.

A new web site for the Sailor Moon Reflections book has been set up. Roland Parliament, voice director for the first 65 episodes of Sailor Moon and the voice of Melvin from the dub, has written this book to share stories of his time working on the series. It will included many behind the scenes tales of the DIC English dub of Sailor Moon including some photos from the time of the recording. Check out the site for more information about the book and to pre-order your own copy. A press release which was included can be read below.

THE ART OF BRINGING THE SAILOR MOON CHARACTERS TO LIFE

In the summer of ’95 an iconic Japanese animated series was transformed into a monumental phenomenon that would improve the quality of English-dubbed animation forever and take the English-speaking world by storm.

Now the man who directed the voices of that cultural juggernaut reveals the process, the endlessly long hours, and the attention to detail that went into making the English version of Sailor Moon the standard by which all English translations of foreign animations are judged.

If you are a current or aspiring voice actor, writer, director, agent or producer, there is wisdom in the following pages. If you are interested in the history of Canada’s performing arts, consider this work an essential chapter. If you are a lover of anime, regard this treatise as a ‘must read’ — an important piece to the puzzle called ‘the gateway to anime’. If you are simply a fan of Sailor Moon, prepare yourself for an incredibly rare and delicious treat.

In this book, voice director, actor and teacher Roland Parliament has created a unique archive that touches on and contributes to the craft and business of voice acting, Canada’s rich performing arts community and the legend of ‘Sailor Moon’ — in particular, the English dubbing of the iconic anime series.

- From the foreword by Terri Hawkes (a.k.a. ‘Sailor Moon’)

What I do want to do is to share with the reader my observations about how this series came to be what it is, and to dispel any rumors that may exist, as I know them. Keep in mind that this is told from my perspective only, based on what I saw, heard and did, and may be contrary to the actual facts.

The second thing I want to do is to share with budding voice actors the way to go about getting into this business.

- Roland Parliament on why he wrote this book

Sailor Moon Reflections, published by FriesenPress, is the inside story of the English recording of Sailor Moon, and will show readers the true, arduous work that actually took place to achieve this groundbreaking series that still receives continuing adoration. Sailor Moon Reflections is as much for anyone with an ambition to be a voice actor as it is for any fan of the series.

Roland Parliament is a voice actor, dialectician, composer, writer, musician and educator. He lives in Toronto, Canada. He teaches an advertising course at the Harris Institute for the Arts in Toronto. Over the past 22 years, he has been a dialects and voice acting teacher at Ryerson University and Humber College, Toronto, and a guest lecturer at the University of Toronto.

Roland has voiced thousands of commercials, and has composed and produced no fewer than 300 jingles. His company, Wizard Productions Inc., has won over 75 international awards for its work. Additionally, he has directed and acted in several animation projects.

Last year at Unplugged Expo 2 Roland Parliament, voice director for the first 65 episodes of Sailor Moon and the voice of Melvin, announced that he would be releasing a book about the dubbing of the show. Sailor Moon Relections, the inside story of the original recordings of the English version of Sailor Moon, is nearing completion. In order to be published it needs pre-orders, which you can put in now by mail or through Pay Pal. Information about this pre-order can be found at Moon Chase. A hard copy of the book will be $20 for softcover and $30 for hardcover. There is also a $4.99 ebook option which does not require a pre-order.

You can also check out Moon Chase to see excerpts of the book which include a foreword by Terri Hawkes, the voice of Sailor Moon.

Check out the Sailor Moon 20th Anniversary voice actor panel at Unplugged Expo to see the original announcement of this book.

Roland Parliament, the voice of Melvin and voice director for the first 65 episodes of the English dub of Sailor Moon, has written a book about his time working on the show. He spoke about this project at the Sailor Moon 20th Anniversary Panel at Unplugged Expo this past weekend in Toronto. This book was written this past summer and includes contributions and photos from many of the voice actors that worked on the original DiC dubbed episodes of Sailor Moon. The book is currently with the editor so it should be completed soon.

We’ll be sure to share any more details about this book’s release as it’s release approaches.

The full content of both panels Sailor Moon voice actor panels from Unplugged Expo have been recorded and will be posted to the site as time permits.