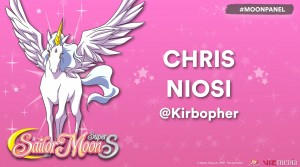 This past weekend was San Diego Comic-Con and, as is the case with many conventions which Viz Media attends, there was a Moon Panel. We didn’t get much in the way of new information at this panel but we did learn that the new voice of Pegasus from Viz’s new dub of Sailor Moon SuperS will be Chris Niosi. Chris Niosi is not only a voice actor but he has also done a great deal of fan and professional animation work. Check out his web site or Twitter feed for more of his stuff. Though nothing about Sailor Moon Crystal was mentioned, with the two movies which will cover the Dream arc having been announced in Japan, it seems only logical that Chris would also provide the voice for Pegasus and Helios once those films are released and ultimately dubbed for North American release. 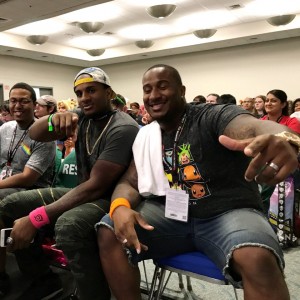 Also of note at the Moon Panel at Comic-Con was an appearance by Mike Daniels, a football player fro the Green Bay Packers. He attended the panel and then posed for photos with some of the staff. 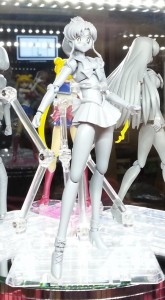 Sailor Jupiter is joining the ranks of Sailor Moon, Mercury and Mars with a great looking S. H. Figuarts figure by Bandai. This picture was taken at San Diego Comic-Con. Once again like with the other figures we’re just looking at a prototype right now. It doesn’t have any colour yet but the final figure will. We can only assume that the price point for this figure will be comparable to the others in the line. Both Sailor Moon and Sailor Mercury are currently listed on Amazon for $42. 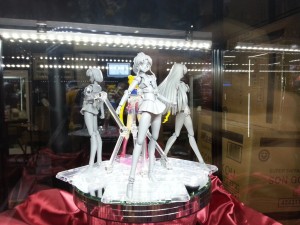 Bandai’s line of S. H. Figuarts figures are highly detailed and posable figures with many swappable parts. It seems likely at this point that a Sailor Venus figure won’t be far behind. Who will come after that? We can only speculate!