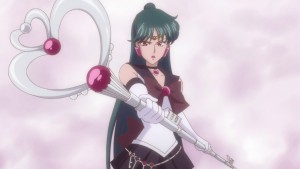 The next English dubbed episode of Sailor Moon Crystal will be available this Friday on Hulu and Neon Alley. Act 19, Time Warp – Sailor Pluto, will be available at 9pm Eastern Daylight Time. Daylight Savings Time is in effect so if you’re lucky enough to live in an area that doesn’t celebrate, Sailor Moon Crystal may be released at a different time than you had been expecting it! This week we go to the future and on the way meet Sailor Pluto who pretty much wants to kill Sailor Moon. Sailor Pluto will be voiced by Veronica Taylor. Anime fans may know her best as the voice of Ash Ketchum in Pokémon! Also appearing in this episode is the adorable cat Diana, though I am not sure who will be performing her voice at this time and we won’t actually hear her speak until Act 20, unless there’s some unexpected ADR. 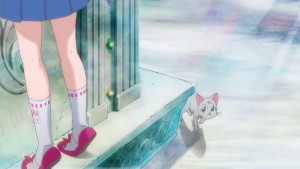 Fans of Usagi and Mamoru will be excited to see them have sex in this week’s episode! This was strongly hinted at in the manga but not at all subtle in Sailor Moon Crystal. We’ll see if the English dub tries to smooth over this sex scene or if they fully embrace it. 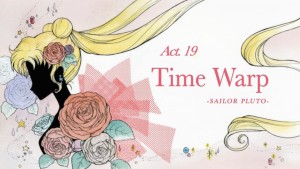 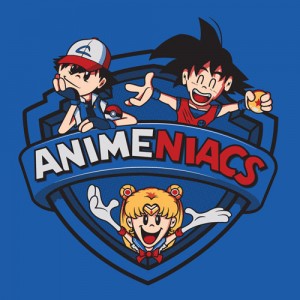 From now until Saturday you can pick up this Animeniacs shirt featuring Ash Ketchum from Pokémon, Goku from Dragonball and Sailor Moon in an homage to the Animaniacs logo. The shirt is $12.99 and will be sold until 2pm Eastern Time on Saturday May 11th at Pop Up Tee.

The artist, Ratigan Designs, also has other shirts in the Animeniacs series for sale. For more by this artist check out Ratigan Designs on Facebook or RedBubble.