The two latest episodes of Sailor Moon S are now available on Hulu and Neon Alley. With this week’s addition of episodes 102 and 103 we wrap up one story and start a new chapter. This is the sort of end of Kaolinite but then we see the return of Chibiusa, who we haven’t seen at all this season! 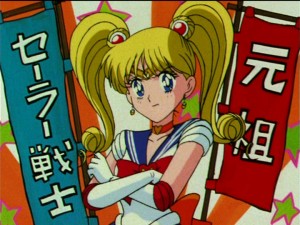 Episode 102, The Stolen Pure Heart: Usagi’s Crisis, is the continuation of the cliffhanger we were left with last week. Usagi can’t transform into Sailor Moon because Kaolinite has taken her broach. She asks for a ride from Haruka and Michiru, who are now convinced, along with Kaolinite, that Usagi is Sailor Moon. How does one get out of such a pinch? Dress up Minako as Sailor Moon! Minako does a decent job with the disguise as she manages to convince everyone that Usagi is nothing more than a fan, which gets Kaolinite to give up the broach as if it was worthless. A fight ensues in which Kaolinite takes the full brunt of Sailor Planet attack and then has her own attack reflected at her with Sailor Uranus’s World Shaking because apparently that’s how it works. She is frozen and then falls in the rubble of Tokyo Tower. She is assumed dead! This episode features the second time we hear “Ai No Senshi”, a song which we first heard during Sailor Moon R when the Sailor Guardians faced off against the Ayakashi Sisters. 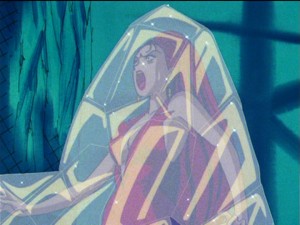 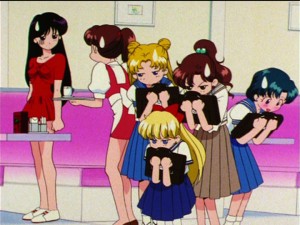 Episode 103, The Arrival of a Small Pretty Guardian, is the beginning of a whole new part of Sailor Moon S, but the beginning of the episode doesn’t hint at it that much. The target is a drummer friend of Rei’s and the rest of the girls assume that this is actually a date. This causes a humorous confrontation in a restaurant where they are trying to spy on Rei and her friend, which ends in a mess, as expected. At a fair Usagi sees something in the reflection in the water which looks like Luna P, but it can’t be! Luna P doesn’t get seen much after this. I believe we don’t see her again until the Sailor Moon S finale and then never again. During the fight a familiar voice is heard. It’s Chibiusa transformed into Sailor Chibi Moon wielding the Pink Moon Stick, which she is not very adept with. Sailor Chibi Moon is not useful for pretty much the entire season so her appearance in fights is a bit of a joke. With that Chibiusa has returned! This episode also features the introduction of Eudial of the Witches 5. There are 5 of them but Eudial is the one that hangs around for the longest. 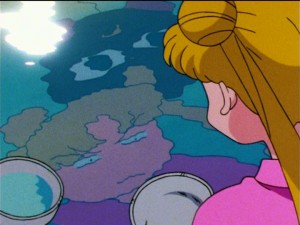 To date the story has focused on Usagi and the rest of the Sailor Guardians but the series is about to get really focused on Chibiusa once again. Many fans dislike the way Chibiusa takes the focus away from other characters, but in reality she’s in the anime a whole lot less than she is in the manga. When Chibiusa leaves at the end of the Black Moon story arc in the manga she returns immediately and remains until the end. In the anime she’s gone for some time, returning only in this episode and staying only until the beginning of SailorStars. The anime gains and discards characters throughout the series, keeping nothing but the core 5 girls while in the manga when a new Sailor Guardians comes on board they mostly stay for good. 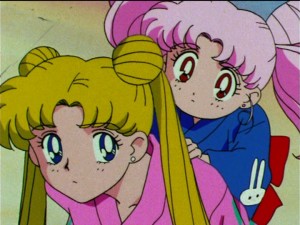