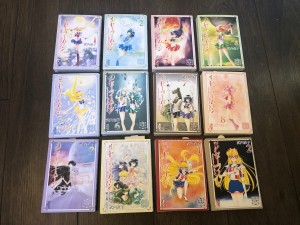 Fans may have noticed that a new version of the Sailor Moon Manga is coming starting April 13th. This version, published by Penguin Randomhouse, is being called the Naoko Takeuchi Collection, named after the Sailor Moon manga’s author. So what is this new version and should fans, many of whom have just bought the Eternal Editions, be looking to pick these up? Probably not! Read on to see why I don’t think this is worth your money.

The Sailor Moon Eternal Editions which were released over the past couple of years really were the ultimate version of the manga. These huge volumes were even bigger than the similar sets which were released in Japan. The pages were a high quality glossy white and all colour pages from the original issues of Nakayoshi were reproduced in these. The 10th and final volume was released last month and Code Name Sailor V will be released on April 27th 2021. You might have thought you were almost done shelling out your hard earned dollars on Sailor Moon manga until the news of these new versions dropped! So what exactly is the Naoko Takeuchi Collection all about? 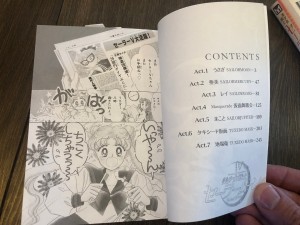 The image on the Penguin Randomhouse web site is likely not the final cover art. What is actually pictured is the Japanese cover of the Sailor Moon Bunko Collection. These versions were released in Japan starting in September 2018, as we originally posted about on this site. Though we don’t have all of the specifics about these new versions it seems likely they will be similar to those. There are usually minor differences between the size and paper quality of Japanese and American versions of the comic, which may be the case with these versions.

As the Japanese versions were fairly inexpensive I bought the whole set. The books are fairly unimpressive. These are very small versions of the manga commonly called bunkobon or bunkoban in Japan. They are A6 size which means they are 4.1″ by 5.8″, smaller than any other versions of the Sailor Moon manga I own. Here is a size comparison photo of the Bunko Collection next to the English Eternal Edition which I took back when I got the first volume of the manga. As you can see this is tiny in comparison. 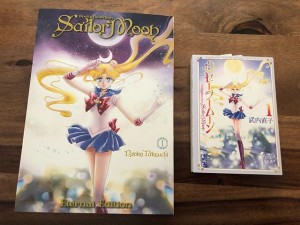 The quality of the paper is also of a lower quality than the Eternal Editions. Instead of glossy white pages we have a simpler more affordable matte paper. Where the Eternal Editions included a large number of colour pages all of those are included in black and white in these versions. The price matches this, with an MSRP of only $12.99 US per book ($16.99 in Canada) these are quite a bit less expensive than the Eternal Edition, but is it really worth saving that money? If money really is the issue the digital versions of the manga, with colour pages, will cost less even than this budget version. 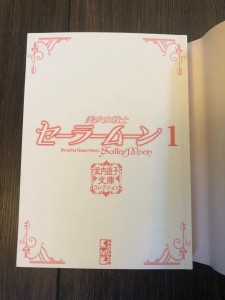 So why are these called the Naoko Takeuchi Collection? A budget version of the manga is hardly fit to be named after a woman who names characters after precious gems and owns multiple sports cars! Instead these should be called the Ghetto Edition, Cheapskate Edition or Budget Edition, but such a name may not be as likely to make sales! Perhaps we could call them the “Mamoru After He’s Gone Shopping With Usagi Editions”!

In short I’m not sure who the audience is. I similarly wondered this about the Japanese version as I continued to order copies of it. If I were you I wouldn’t bother. Check out the Eternal Editions if you haven’t already! They are fantastic! They are expensive and although the price tag and Canadian prices have meant I haven’t bought them all yet I do plan on doing so. They are worth every penny! Feel free to support the site by buying the physical or digital versions from Amazon using the links below.