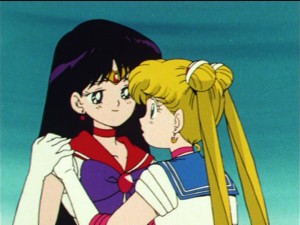 This morning, October 13th, the final two episodes of the first season of Sailor Moon were added to Hulu and Neon Alley. With the addition of episodes 45 and 46 the entire first season is now available to stream in Japanese with English subtitles. This two part story concludes the battle with the Dark Kingdom and Queen Beryl, wrapping up the first story arc for the Sailor Moon anime. These are a couple of the better episodes of the series. These two episodes were heavily edited and reduced to a single episode, Day of Destiny, in the DiC English dub. If that’s the only version you’ve seen these episodes should not be missed. 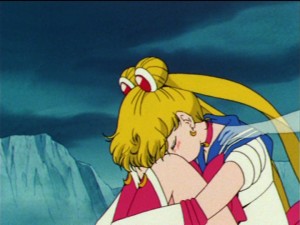 Episode 45, Death of the Sailor Guardians: The Tragic Final Battle, has, as the title suggests, everyone dying! The Sailor Guardians head to the D Point in the North Pole to fight the Dark Kingdom but are intercepted by the DD Girls who basically kill everyone but Sailor Moon. It’s not all in vain as the Sailor Guardians manage to kill all of the DD Girls, leaving Sailor Moon to move on. Naturally she’s a bit shaken by the death of her friends, and can’t find the strength within herself to move on but their ghosts appear to give her the words of encouragements she needs to move on and face Tuxedo Mask and Queen Beryl. 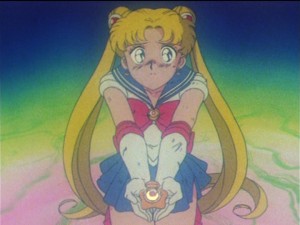 Episode 46, Usagi’s Eternal Wish: a Brand New Life, has Usagi left alone with all of her friends killed. When she finally meets Queen Beryl she is shocked to see that Tuxedo Mask is evil and loyal to her. In an excruciating and violent fight he beats her up quite a bit while she avoids fighting back until the last moment where she attacks him with her tiara. After restoring his memories thanks to the power of her locket he is in turn killed by Queen Beryl. Sailor Moon is now truly alone, having lost all her friends and now her lover, and must face off against Super Beryl, which is Queen Beryl amalgamated with Queen Metalia. The battle is won, thanks to the ghosts of her friends, but since this is still the first season using the Silver Crystal kills Sailor Moon. Her last wish is to make things like they were, and so the world is transformed. The Sailor Guardians are alive again but have no memory of what happened or even knowing each other, but the Dark Kingdom has now been defeated. 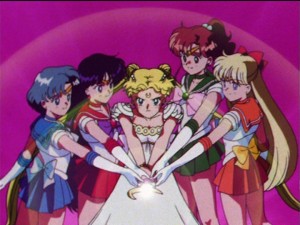 Next week we start with Sailor Moon R! But the story of the Black Moon Clan won’t begin right away. First we will begin with a short set of episodes surrounding Ail and An, two aliens who use cards and a big tree to drain people’s energy.