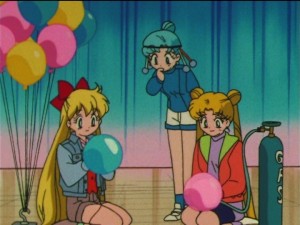 We’re starting to wrap up Sailor Moon SuperS with this week’s new additions to Hulu and Neon Alley. Today we get episodes 160 and 161 which focus on the Amazoness Quartet. It’s a bit difficult to say when a Sailor Moon episode is fully standalone or part of an arc of episodes. Episode 160 has its own contained story but episode 161 ends in a bit of a cliffhanger which is why I’ve always considered it to be the first of a six part season finale for Sailor Moon SuperS. Yes that’s right. Sailor Stars is only 3 weeks away! If all continues at the rate it has we should be seeing the first episode of Sailor Moon Sailor Stars on Monday December 14th. If they play only the final episode of Sailor Moon SuperS that day we will get Sailor Star on December 21st. 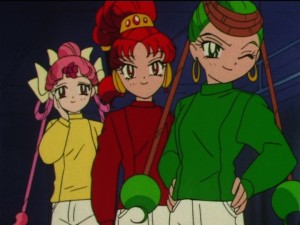 Episode 160, Dream to Be an Adult: the Amazoness’ Confusion, has the Sailor Guardians and the Amazoness Quartet getting along. The girls are setting up for a coming of age ceremony as they wear tags saying “20 age”. What is this? It’s a Japanese holiday called “Coming of Age Day” which celebrates a person coming into the age of majority, 20 years old. It’s sort of like an older Bar Mitzvah. Until 2000 the day was celebrated on January 15th. This episode aired on January 20th 1996, the Saturday following that year’s Coming of Age Day. How topical! The gang is setting things up and the Amazoness Quartet come along to help. This launches them into some deep questions about whether or not it’s good to become an adult. All of the girls here are under the age of majority, with the Sailor Guardians being around 15 years old and the Amazoness Quartet girls being somewhere between that age and Chibiusa’s age, ignoring of course that Chibiusa is over 900 in the manga. They clearly identify as children in most respects with their love of play. Perhaps in 1996 this was more of a question as adults of older generations more commonly abandoned the joys of youth as they graduated to adulthood. As a 37 year old Sailor Moon fan myself it’s easy to say there are many adults, including those who are reading this site most likely, who still find time and a place in their hearts to pursue interests which are more commonly aimed towards children. Peter Pan syndrome is much less of a taboo as adult toy collecting, comic book reading, video game playing and other such interests are common for mainstream adults. This episode’s Lemures, BiriBiri Yarou, is a large catfish that somewhat resembles Pac Man as he swims around in the air eating Dream Mirrors like little pellets of fish food. 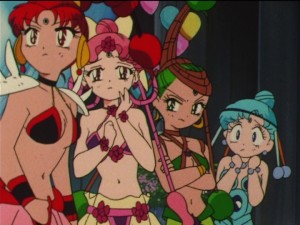 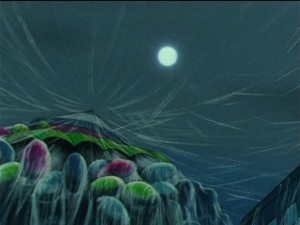 Episode 161, Terror in Motion: The Dark Queen’s Evil Hand, is a somewhat slow paced episode. The main things that happens here is that there are a bunch of spider webs. There are not only spider webs around houses and trees and such but they seem to cover the sky itself. I’m reminded of the old 60s Spider-Man cartoon where Spider-Man would be swinging from webs that anchored high above him as the tops of buildings were clearly seen in the background. What, I wondered, were these webs sticking to? Perhaps the clouds? It’s nonsense but what else is up there for the webs to stick to? Whatever it is, that is the same thing that this week’s spider webs are attached to. As the webs get more and more prominent the sun gets darker and darker which is hurting Mamoru. The gang head to the Dead Moon Circus tent because after a season of this we’re finally putting two and two together and suspecting this thing. They find the Amazoness Quartet with tons of bodies and Dream Mirrors in a pretty creepy sight. Finally there’s a surprise eclipse which blocks out the sun which makes us wonder just what was the point of all of these spider webs anyway? The webbing was blocking out the sun but an eclipse does a much better job of that. This is having quite a toll on Mamoru who is very sensitive to negative impacts to the Earth. I wonder if Mamoru will sweat more and more as global warming slowly heats our planet. I guess we all will! As a bit of a cliffhanger in the final scene Pegasus shows up to tell us all that things are getting real. 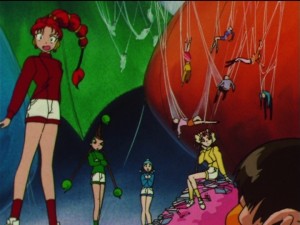 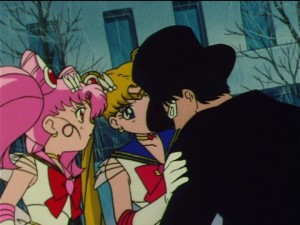 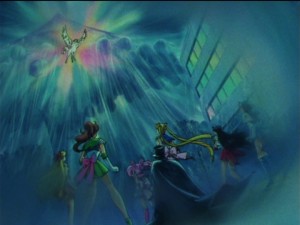