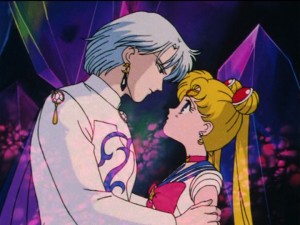 The two final real episodes of Sailor Moon R are now available on Hulu and Neon Alley. This week we wrap up the story of the Black Moon Clan, Chibiusa and Crystal Tokyo with episodes 87 and 88. There is in fact one more episode left in Sailor Moon R but next week episode 89 is just a clip show which is a complete waste of time. The important thing is that you can now watch the whole Sailor Moon R season on Hulu. 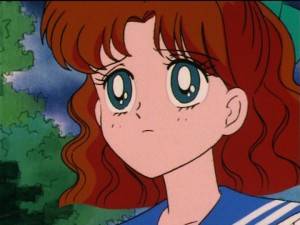 Episode 87, Believing in Love and the Future: Usagi’s Decision, wraps up the Black Moon Clan’s story. First we get a rare look at Naru. Remember her? She’s still around! Though she doesn’t give any specifics it seems from what she says in this episode that she has an idea that Usagi is Sailor Moon or at least somehow involved in the various crazy things that are happening to her city. The gang transform and Sailor Moon faces off against Prince Demande who proceeds to use his mind control to try to rape kiss her. This is pretty much completely terrible but he quickly redeems himself when Wise Man tries to kill Sailor Moon and he takes the lethal blow for her, seemingly killing Wise Man as well. As Demande dies in Sailor Moon’s arms she promises to free the rest of the people of Nemesis. I wonder if Neo Queen Serenity followed through with this promise when all was done. Does she actually remember having promised this or did that occur in a new timeline 30th century Neo Queen Serenity has no memory of? You would think a Neo Queen Serenity with full knowledge of what happened in present day Tokyo could have simply prevented all of this from happening in the first place, but I don’t think time travel works that way in this show. Well Wise Man isn’t actually dead as he puts himself back together in a flash! Ready to fight in the final battle in the next episode! 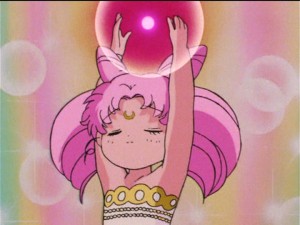 Episode 88, The Final Battle Between Light and Dark: Pledge of Love for the Future, is the final real episode of Sailor Moon R. First we have to deal with the Black Lady situation. The cure for this is love, as the Silver Crystal is used on her to give her positive memories bringing her back to reality and her normal young self. The family is back together but Wise Man is still making trouble. That’s okay because we have the Silver Crystal and… what’s that? A second Silver Crystal? Chibiusa finally remembers what happened. She took the Silver Crystal which disappeared inside her body and now she’s able to use it to get a cool princess dress and fight Wise Man! This is where she would be turning into Sailor Chibi Moon in the manga but they don’t do that at this point in the anime. Wise Man is easily defeated. What follows the next day is a tearful farewell between Chibiusa and her friends. Usagi and Chibiusa cry while holding each other at which point Chibiusa calls Usagi mamma and departs to the future. Back in the 30th century everything is fine. I guess the sun finally came back up! Peace is restored as is Neo Queen Serenity. What does a proud mother have to say to her young daughter who traveled through time to fight evil and literally save the world in two timelines? “Welcome home.” 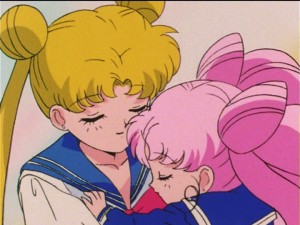 Episode 88 features the song “La Soldier” during the fight with Wise Man. This is the main song from the Sailor Moon Musicals. I wondered why I couldn’t find it on any anime soundtrack for years until I realized it was simply on Musical soundtracks.

This wraps up Sailor Moon R! Chibiusa sure did seem like a brat at first but given all she’s been through it’s hard not to have some sympathy and respect for what she endured and accomplished. We won’t be seeing her for a while. In the manga she came back nearly as soon as she left, cementing herself as a permanent character in the show. This is not the case in the anime as she will be gone for some time and won’t actually be staying until the end. Chibiusa haters think she dominates the story too much but in reality her appearance in the anime is much less than what it is in the manga. She does not have a considerable role in anything but Sailor Moon SuperS from now on, but this is a while away. 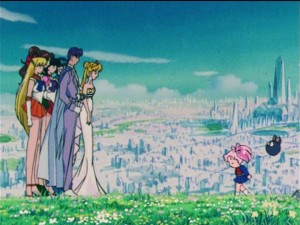