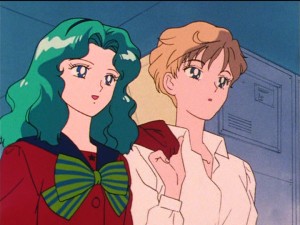 The latest two episodes of Sailor Moon S are now available on Hulu and Neon Alley. This week with episodes 92 and 93 we are introduced to two new character, Haruka Tenoh and Michiru Kaioh. We also get a much better look at Sailor Neptune and Uranus who happen to have very similar hair styles to these characters. 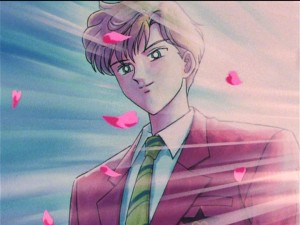 Episode 92, A Handsome Boy? Haruka Tenoh’s Secret, shows us what is really up with Haruka right out of the gate. Minako and Usagi are infatuated with this hot new guy who has been coming around the arcade, and don’t see what’s really up. His beautiful friend, Michiru, appears to be his girlfriend, but not all is as it seems! The target this week is a mechanic and the enemy a cool looking sports car. Haruka and Michiru chase after the Daimon, dropping their motorcycle on her and then disappearing! Not long into the fight we see Sailor Uranus and Neptune, the new Sailor Guardians we previously only got a brief look at. To the audience it seems quite obvious that these are the alternate identities of Haruka and Michiru but to the girls in the show this is not quite as obvious. How could they be, as Haruka is clearly a guy… or is he? Haruka and Michiru show up at the arcade again but this time Haruka is not wearing her jacket and so it’s obvious that she’s actually a woman! This is a shock to Minako and Usagi, while Usagi assures herself that she always said that Mamoru was more attractive. This scene can be seen as being a bit homophobic. It’s not unlike the overplayed trope of a man finding a trans woman attractive but being shocked to learn she is trans. Usagi and Minako’s reactions however are not of revulsion but more of surprise, and they show no negative feelings towards Haruka or the way she choses to express herself at any time in the series. Indeed many characters are shown to have feelings of attraction to her later in the show and these feelings which are not strictly heterosexual are portrayed as being perfectly normal and not presented negatively. 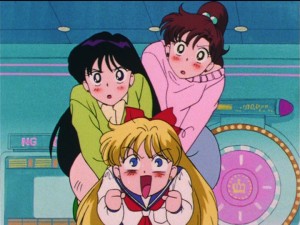 So just what is going on with Haruka in this episode, and later in the series? She is female for all purposes but the misunderstanding in this episode and it’s title. She dresses in men’s clothing but there doesn’t seem to be any real indication that she is trans or that she gender identifies as male. She is a masculine woman who has no problem with displaying her masculinity in the way she acts and dresses. In the manga her identity is more complex, which could be seen as being a trans man, but this is generally not the case in the anime. Much of the gender confusion is harder to express in English due to it’s frequent use of gender specific pronouns. This is less common in Japan, which is why we can frequently have stories which deal with characters whose gender is unknown or mistaken without it being discovered as soon as a “he” or “she” is dropped over the course of normal conversation. When it comes to sexuality Haruka is attracted to women while Michiru appears to be attracted to both men and women. Haruka and Michiru are lovers. Their relationship is presented with little ambiguity throughout the series. In the English dub they were presented as cousins which is a little odd as this shows them as being in a lesbian incestual relationship, rather than in a simple lesbian relationship. Why it was decided that cousins made more sense than simply downplaying their relationship as friends isn’t something I pretend to understand. Regardless this is the original Japanese uncensored version so their relationship is presented as intended, as we expect to see it in the upcoming English dub being done by Viz. 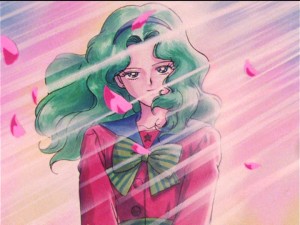 Episode 93, Usagi’s Idol: The Graceful Genius Michiru, focuses more on the character of Michiru Kaio than the last episode had. We learn that she is a very talented violinist. The target for this episode is a fellow violinist and the Daimon of the week is a violin monster who uses sound as an attack. Usagi seems quite attracted to Michiru in this episode, though this attraction seems to mostly be about admiration than actual attraction. Still the season is fairly open about presenting attraction between same sex characters as being a perfectly normal part of adolescence. 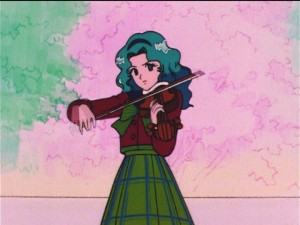 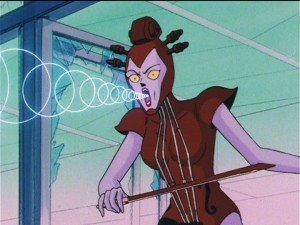