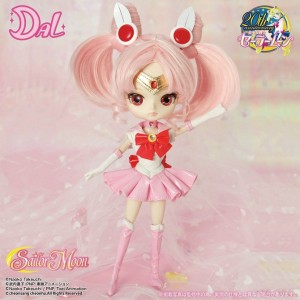 The Sailor Chibi Moon Dal doll from the Pullip line has been announced on the on the Sailor Moon official site. Wait, what is a Dal doll? This is clearly a Pullip doll but what’s with the weird name? Much like the Tuxedo Mask Taeyang doll that was clearly a male Pullip doll, this one is called Dal but clearly part of the Pullip line. I said earlier that Taeyang was the male equivalent of the Pullip doll. This is not entirely accurate. These dolls are Pullip’s companions. The first such was Namu, who was Pullip’s boyfriend. Next came Taeyang, Pullip’s second boyfriend. Dal is Taeyang’s 13 year old sister, a rival to Pullip. This doesn’t really fit as Chibiusa is Mamoru’s daughter, not sister, but she is in a way Usagi’s rival. I’m not sure why these characters are being used to describe all these peripheral dolls. I suppose they are just the base models used for the dolls, while Pullip herself is used for most of the girls that were released previously. Dal is a bit shorter than pullip at 26.5 cm, so it makes sense to have Sailor Chibi Moon be a bit smaller. Size, design and cost will mostly resemble the other models as Sailor Chibi Moon would be expected to sell for roughly $150 once released in North America. Her Japanese MSRP is 17,000 yen.

The doll looks creepier than usual to me but that’s probably just because it’s from the Dal line which has a slightly different face mold. Check out this picture of other Dal dolls to get an idea of what those usually look like.

Support the site by buying other Sailor Moon Pullip dolls using the Amazon links below:

5 thoughts on “The Sailor Chibi Moon Dal (Pullip) Doll is the creepiest yet!”