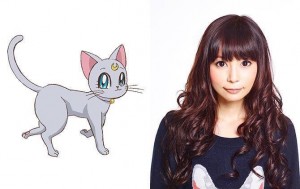 The new voice of Diana for Sailor Moon Crystal will be Shoko Nakagawa. This announcement was made on the Sailor Moon Official Site which included an image of Diana which is included above. Shoko Nakagawa is a media personality best known as the presenter of Pokémon Sunday, a variety show about all things Pokémon. She is also an actress and singer, having performed a great number of anime series opening and ending themes including many for the Pokémon anime and movies.

Diana is the future daughter of Luna and Artemis who lives in Crystal Tokyo. She is Chibiusa’s good friend, much in the same way that Luna and Artemis are Usagi and Minako’s companions. While Diana did not appear until Sailor Moon SuperS, the 4th season of the original anime, she appears much earlier in the manga. Diana’s first manga appearance is at the end of Act 19, Time Warp – Sailor Pluto, which is this coming Saturday’s episode which will be available on April 4th. Diana appears only briefly at the end of this chapter of the manga, vocalising little more than a simple meow. We will likely not have Shoko Nakagawa saying much until Act 20, Crystal Tokyo – King Endymion, which will be available April 18th.