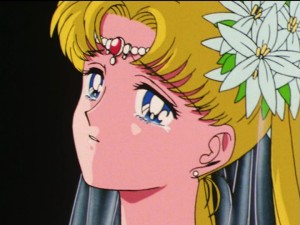 The two latest episodes of Sailor Moon R have been posted to Hulu and Neon Alley. This week we get episodes 77 and 78. Everything is on the table about Mamoru and Usagi’s relationship and then while everyone is sick nurse Minako tries to help them get better. 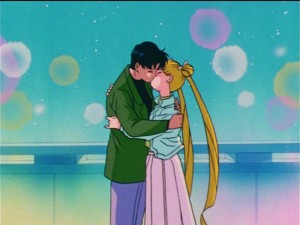 Episode 77, Shared Feelings: Usagi and Mamoru in Love Once Again, somewhat but incompletely wraps up a pretty terrible storyline. As we have seen since the beginning of the Black Moon story arc, Mamoru is being haunted by dreams that show Usagi dying as a result of their being together. Though it’s never said how this could happen or why they should stay apart, Mamoru won’t take the risk and so he breaks up with Usagi. This logic on his part makes sense and is similar to that seen by other fictional series time and time again. What changes this week is that Usagi finally sees the same vision. The result of this is that she confronts Mamoru about the dream and makes the decision for both of them that it really doesn’t matter. This really does nothing to wrap up this story arc as we don’t actually learn where these visions are coming from. This will be learned in a later episode in an even less satisfying conclusion to this ridiculous story arc. The main story of the episode revolves around promise rings that aren’t really rings. They are bracelets that are exchanged between lovers. When I was a kid it was all about gimp bracelets. I guess this kind of bracelet made of string was big in the 90s in Japan. These days it’s all about those little elastics. Usagi and Chibiusa try to use these to get Mamoru to get over his love troubles. It doesn’t really work. The most important part of this episode however is not about Usagi and Mamoru’s relationship. It’s about Minako and Artemis’s relationship! When things get serious and Chibiusa is attacked by her “promise ring” all of the Sailor Guardians are called in. We see Minako receive the call on her communicator while wearing nothing more than a towel. She then, still in the towel, tells Artemis that it’s time to go as he is right in front of her. Scandal! Minako is completely comfortable letting Artemis see her get out of the shower or bath wearing nothing but a towel. Perhaps he was around for the shower as well! 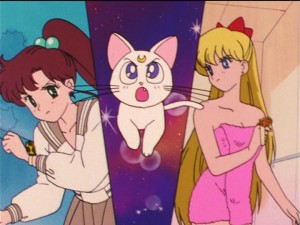 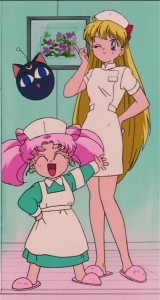 Episode 78, Venus: Minako’s Nurse Mayhem, is a great comedy episode. Everyone is sick with the flu and while the people of Tokyo are walking around wearing face masks as they do when they are sick Minako is in great shape! She travels from home to home with Artemis and Chibiusa offering to help everyone try to get better! Hilarity ensues as she does a terrible job of doing so, serving food that is too salty or hot, messing with people’s stereos and generally not helping when she is trying to. In one scene we see Rei breathe fire for the second time in the series. She last had flames spew from her mouth when Usagi put hot sauce on her hamburger while they were watching the cherry blossoms in episode 51. Ultimately we learn that the flu is actually a plot by Esmeraude. Sailor Venus defeats her only to fall ill herself! In a perfect act of revenge Usagi shows up to help her get better. 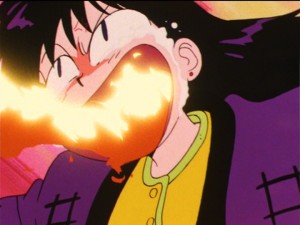 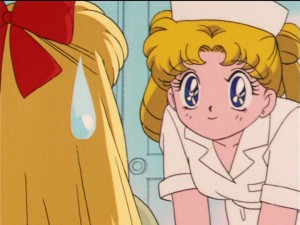