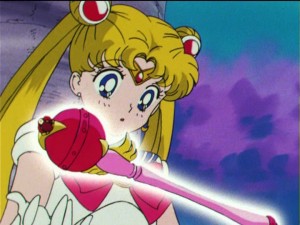 This morning, November 3rd, the two latest episodes of Sailor Moon R were added to Hulu and Neon Alley. This week we have episodes 51 and 52 as Sailor Moon upgrades her transformation and attack item and we get a better look at Minako. 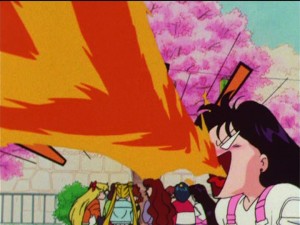 In episode 51, A New Transformation: Usagi’s Power-Up, the gang go watch the Cherry Blossoms. This seems a bit like a school trip but for convoluted reasons all of the Sailor Guardians, who are not in Usagi’s class, come along. Naru chokes Umino in a sleeping bag and everyone has a good time eating while watching the cherry trees bloom. An interesting animation technique is used in this episode as character are animated as talking to each other while a zoomed out version of the group appears in the background. During this interaction we see that Usagi is lazy and makes bad lunches but Rei is even lazier and brought fast food burgers. Usagi feeds Rei a sandwich covered in a spicy sauce causing her to breather fire, one of the last times she’ll use her Fire Soul technique and the only time it’s used while she is not transformed into Sailor Mars. A monster shows up, breaks Sailor Moon’s transformation broach and then she falls into a hole which takes her to visit Queen Serenity who upgrades her broach to the Crystal Star, returns the Silver Crystal to her and gives her the Cutie Moon Rod! Where was this weird subspace type world she visited? It’s never really revealed but it looks a bit like Silver Millennium. 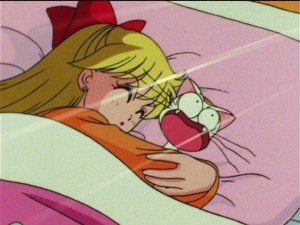 Episode 52, The Targeted Kindergarteners: Venus to the Rescue, is a Minako episode which is all about shipping Minako and Artemis. The episode opens with Minako hugging Artemis in bed then she accuses him of peeping on her while she’s changing. Ultimately Minako runs into a young girl who is getting bullied and helps her out. The monster of the week is attacking kindergarten children and so Minako has decided to protect them. The young girl she befriends is a fan of Sailor Moon but, much to her chagrin, has never heard of Sailor Venus! This changes of course when Sailor Venus saves her life. Minako gets a new attack in this episode, her Crescent Beam Shower. The rest of the gang will eventually also be getting new infrequently used attacks in upcoming episodes. 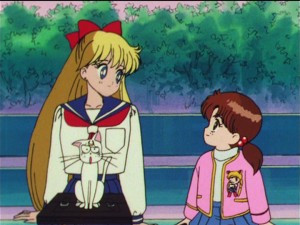