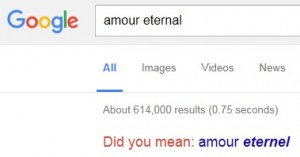 26 thoughts on “The next Sailor Moon musical, Amour Eternal, has a terrible name”