At long last Sailor Moon Sailor Stars now has an official release in the United States. Enjoy Hulu’s new banner featuring characters we won’t be seeing until 6 or more episodes from now! This morning the final episode of Sailor Moon SuperS and the first episode of Sailor Stars were added to Hulu and Neon Alley. New episodes will be added every Monday until the series completes. With this we finally wrap up the story with Queen Nehelenia… and then we unwrap that story because well the anime didn’t quite match up with the manga and we need to go back and fix a few things. Sailor Stars was first released in Japan back in 1996 but it was never released in English when the series was originally dubbed. Fans who were looking to see the end of the series originally had to trade fan subbed video tapes, buy the expensive laserdiscs and later buy either bootlegged DVDs or expensive imports with no English subtitles. Some of us actually did all of those. I’d like to thank VKLL for keeping me in Sailor Stars fansubs over the years. Before we get to the first episode of Sailor Stars, we have one more episode of SuperS to take care of. 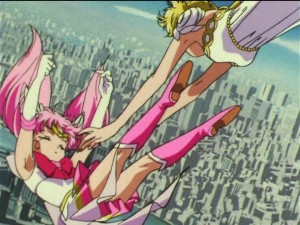 Episode 166, Dreams Forever: Fill the Heavens With Light, finishes up a story which already sort of seems finished. The enemy seemed defeated as the children of the world, including the viewers, were asked to say “Moon Crisis Power” and vanquish evil, but Nehelenia has one last trick up her sleeve! The circus tent she’s on is floating away in the sky towards the Moon. We get some backstory on why Nehelenia is evil. She was afraid to become old so she ate the mirrors of all of the people who loved her. Before retreating into her mirror she tosses Sailor Chibi Moon off of the tent to her death. Sailor Moon, being the bad ass that she is, does not hesitate and dives after her. This shows Sailor Moon’s true strength. She has no plan. She does not have any reason to expect this to work out but she refuses to give up even for a moment and jumps to her certain death to save her daughter. What follows is a fairly long but tense plunge down to the Earth as Sailor Moon eventually catches up to Sailor Chibi Moon. She finally wakes and summons Pegasus just in time to give them wings and save them right now the ground. Never mind that they are seen breaching the top of skyscrapers over a minute before being rescued, much longer than it would take a person falling at terminal velocity to hit the ground, but this is just for dramatic effect. The world is saved. Chibiusa is saved. Everyone is happy. Chibiusa and Helios say their goodbyes as the Amazoness Quartet decide it wouldn’t be their style to do the same. It is a bit sad that these characters don’t get to become Sailor Guardians like they should have, but the first six episodes of Sailor Stars have enough to fix without doing anything about that. 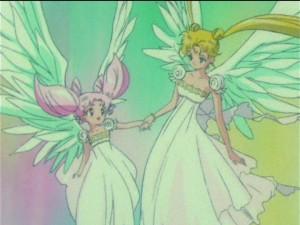 In the final scene of this episode all characters are wearing familiar clothes. They are actually wearing the exact same things they were wearing at the beginning of the Sailor Moon R movie both in the credits, at the flower garden and then at the Hikawa Shrine. All of Sailor Moon S and SuperS have taken place since the R movie! What are the chances that six people happen to be wearing all of the same clothes on the exact same day after two years? Chibiusa, naturally, is wearing something different. She would not likely have fit in her old clothes and it may not have been kept after her trip to the future and back. What do the movie and this episode have in common? I couldn’t find much though they were both directed by Kunihiko Ikuhara. This may be one reason for the similarity.

Episode 167, The Flower of Nightmares Scatters: The Queen of Darkness Returns, is the first episode of Sailor Moon Sailor Stars, but we won’t be seeing the Sailor Starlights, Star Crystals, Sailor Animamates or Sailor Chibi Chibi for a while. Why not? Well because we have to redo a bit of Sailor Moon SuperS to get things to the baseline they need to be at for Sailor Stars. A recurring problem with the original Sailor Moon anime is that it gets written while the manga is still in development so the stories deviate a lot. The main problem that this episode has to make up for is that Sailor Uranus, Neptune, Pluto and Saturn were in the later half of the Dream arc of the manga but did not appear in Sailor Moon SuperS. There was this whole story in the manga where Hotaru grows at a fast rate and then they come join the rest of the gang. In the manga Professor Tomoe died in the big battle but in the anime he survived and kept Hotaru, his daughter who he loved. His daughter who he literally sold his soul to protect. The single only important thing in the world to him, his beloved daughter, is snatched away by Setsuna in this episode. This is completely unforgiveable and this is the kind of mess you end up with when your show deviates too much from the source material and then you have to play catch up.

Annoyingly we have to pretend Chibiusa is leaving again. This scene is absolutely terrible. I just can’t stand anything about it. We’ve seen Chibiusa try to leave and fail in Sailor Moon R a bunch of times, and then we see her leave in what is actually a very touching scene. Then Sailor Moon S wraps up with the fake leaving, which is lifted from the manga, which has Chibiusa make a big deal about leaving but then come back immediately. So now Chibiusa tries to leave but can’t because there are shooting stars which it turns out aren’t really what they seem. To make matters worse we do all of this song and dance but Chibiusa’s days are actually numbered and she will leave the series between episodes, with no tearful send off, and is erased from the show like Pootchie going back to his home planet. Surely some may have felt that there was too much focus on Chibiusa in Sailor Moon SuperS, but the answer to this is not, as Sailor Stars plays out, simply to erase her from the story. This scene should have been removed and placed when Chibiusa actually leaves, a time which should have had a stronger emotional impact, but here we are. So Nehelenia is back and the gang is all back together as Setsuna shows up with this new baby while Haruka and Michiru are fighting bad guys. They get their suits upgraded and now we’re all but caught up. Mostly. More on Saturn next episode. 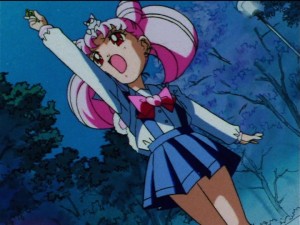 Oh boy that was a pretty negative review. I guess I have strong feelings on some of these things. Don’t let my pessimism keep you from watching! There’s a lot of good stuff in Sailor Moon Sailor Stars to come and this first chunk of six episodes is a very good short arc of episodes which just doesn’t have much to do with the rest of the season. 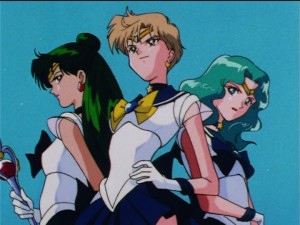 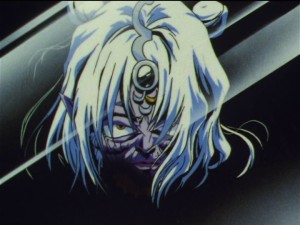