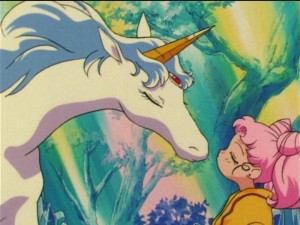 As with every Monday two new episodes of Sailor Moon have been added to Hulu and Neon Alley. This week we get Sailor Moon SuperS episodes 158 and 159. A ton of plot is given as Chibiusa switches ages with Usagi, deepens her relationship with Pegasus and keeps it all from her friends. 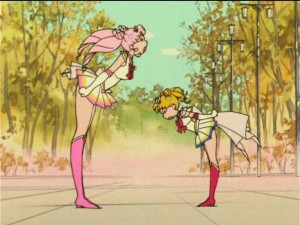 Episode 158, Pegasus’s Secret: the Boy Who Protects the Dream World, is sort of like the plot of a 1988 comedy movie. That year brought us Vice Verse and 18 Again, two movies where the main characters envied each other’s ages and through magic switched bodies! Something like this happens as Sailor Moon and Sailor Chibi Moon, bickering in front of PallaPalla, are complaining that the other has it better at their age. PallaPalla uses her magic to grant their wish, and high jinx ensues. Usagi is young which is mostly silly. Chibiusa gets older which to her is a big change. This hasn’t happened since that time she was evil! Oddly old Chibiusa doesn’t look that much like Black Lady which doesn’t make much sense to me. Well Chibiusa is old but it seems Pegasus isn’t all that into her anymore, which is oddly inappropriate. Chibiusa meets him once again in her dream and he gives her the exposition of all exposition. We learn that he’s really a boy named Helios and that his kingdom of Elysion was attacked and that he’s being held hostage by the villain who we still don’t really see. We kind of get more plot now than we have all season. Chibiusa finally goes back to being young again, sparking Pegasus’s interest once more. They go to kiss each other as Pegasus reveals his true form as Helios. 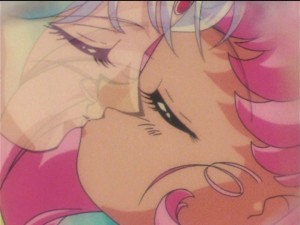 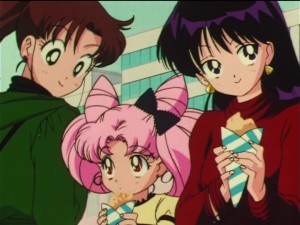 Episode 159, Chibi-Usa’s Little Rhapsody of Love, is a great comedy episode. Chibiusa’s love of Pegasus is beginning to become obvious to Usagi and her friends, but Chibiusa is never actually seen with any boys so everyone is wondering just who it is she’s infatuated with! Thus begins the inquisition! First Rei and Makoto try to drill her for information, but this just results in Makoto repeatedly assuming it’s her “sempai”. When Minako and Ami try to get to the bottom of it they learn that Chibiusa is in love with someone who is white with a long face. The audience knows this is Pegasus but without knowing this is a horse this sounds like the description of a frightening looking man with a horse face. Chibiusa is at a pond looking at some fish and there happens to be a terribly unattractive man there who everyone decides must be the object of Chibiusa’s affections. Sadly he is not but by sheer coincidence he is being targeted by JunJun so a little battle ensues. 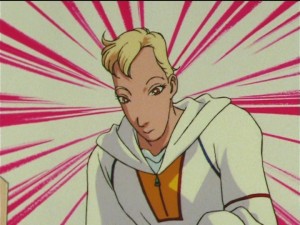 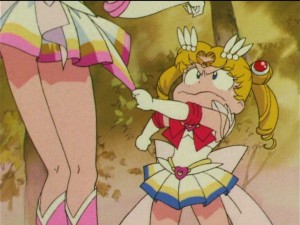 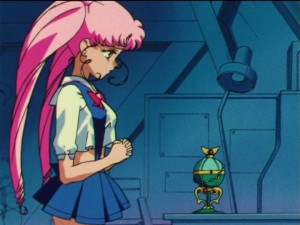 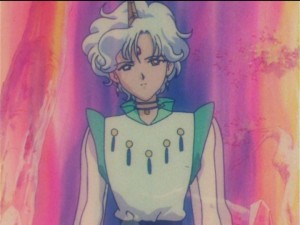 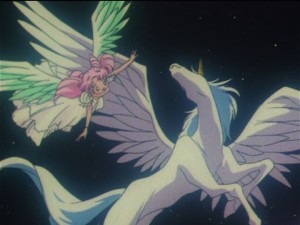