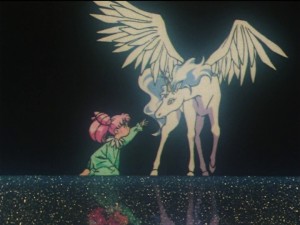 This morning the two latest episodes of Sailor Moon which were added to Hulu and Neon Alley were the first two episodes of Sailor Moon SuperS. This is the 4th season of the original Sailor Moon anime loosely based on the Dream arc of the Manga. This introduces us to the Dead Moon Circus which at this point is Zirconia and the Amazon Trio. Hulu updated their banner now that the new season is available. This new banner shows the Sailor Guardians in their powered up Super forms, including an image of Chibiusa and Usagi in their Princess dresses with Pegasus wings from the final episode of the season. What a spoiler! Many fans don’t seem to like this season that much given the amount of focus that is given to Chibiusa. My feelings are mixed. While most of the season spends a lot of time with filler without focusing on the main story I find that those episode are still quite well done, giving us some very interesting well fleshed out villains and hilarious monsters in the form of the circus inspired Lemures as well as providing very good character development for Usagi and Chibiusa, though this is done at some expense as there is of less development amongst the other Sailor Guardians present and Haruka, Michiru, Setsuna and Hotaru don’t appear in the season at all. 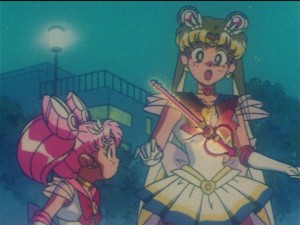 Episode 128, Meeting of Destiny: The Night Pegasus Dances, starts out with Chibiusa’s dream. This dream, which is a mix of dream and reality, has her encountering the winged horse Pegasus. Pegasus is the proper name of an individual, much like the Pegasus of Greek Mythology. I’ve had many debates about whether or nothing there is such a thing as “A pegasus”, a species, as is used in such places as the Dungeons and Dragons Monster Manual, or whether it is a proper name as it is here. For Sailor Moon purposes, Pegasus is not “A pegasus” but rather a winged horse with a golden horn who is named Pegasus. This means he is also a unicorn, which is not a typical way to portray a standard pegasus. Pegasus exists in Chibiusa’s dream but he is not a figment of her imagination, as we learn later in the episode when he appears to save the day during combat. Pegasus uses his powers to transform Sailor Moon into Super Sailor Moon, which she can’t do without the Holy Grail which she should still have but doesn’t use, and also transforms Sailor Chibi Moon into Super Sailor Chibi Moon for the first time. Pegasus will not be using his powers to power up the rest of the Sailor Guardians for about another half season. He also gives Sailor Moon the Kaleidomoon Scope, which is a weapon named after a kaleidoscope, a toy used by children to use mirrors in order to make a cool design when you look into a tube. 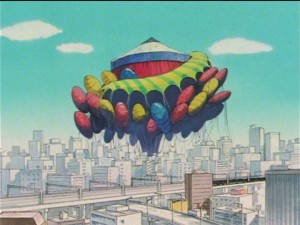 This episode introduces us to the Dead Moon Circus who’s big top appears during a solar eclipse where the Moon passes between the Sun and the Earth. Though a flying big top appears over Tokyo no one seems to question it. The in story reason for this that is given is that people do not question things that change, assuming it happens for a reason. This is an appealing thought, and one used by promoters of pseudoscience to explain why sheeple don’t see evidence for UFOs or other conspiracy theories, though the opposite is generally true. Humans are wired to detect patterns and we often see some that aren’t there. The flip side of this is that we don’t often miss patterns that are there and that we are more likely to assign meaning to the meaningless than to assign no meaning to something meaningful. For the purposes of this fiction though, the idea that no one notices the big top is an effective plot device and a funny idea. It does somewhat resemble the idea of bystander apathy, where everyone assumes something is someone else’s problem, so no one does anything, but that doesn’t really work in the way the big top goes unnoticed. The target for this episode is Unazuki, Motoki’s sister. The targets for this season are pursed by the Amazon Trio which is comprised of Hawk’s Eye, Tiger’s Eye and Fish Eye. Since Unazuki is a young girl, she is pursued by Tiger’s Eye. Once captured Hawk’s Eye makes Unazuki’s Mirror of Dreams appear before her. When looking through it the victim screams as if the violation of having their dream probed was a serious assault. Fairly creepy. 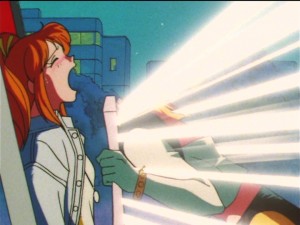 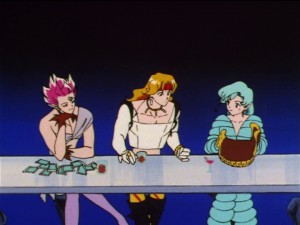 Episode 129, Super Transformation Once Again: Pegasus’s Power, is a title as ridiculous as the hyped second transformation it refers to. OMG Pegasus showed up again! OMG we transformed for a second time! This will happen repeatedly throughout the season as Pegasus is (almost) always required for Moon Crisis Makeup (although Sailor Moon did it without any aid in order to save Sailor Saturn last season) so we will constantly have him show up as part of the lengthy transformation and attack sequence of this season. This week’s target is Reika, Motoki’s girlfriend. Hawk’s Eye targets older women, so Reika falls under his domain. Apparently older doesn’t mean much older, as Reika is college aged. Tiger’s Eye’s upper age limit seems to be pretty low. While Reika is the focus this is also a Chibiusa episode. There will be a lot of these in Sailor Moon SuperS. Reika’s horse reminds Chibiusa of Pegasus and so she asks her, by using a carrot to indicate his horn, if she’d ever seen a horse like him. Reika recalls such a horse from the world of dreams. This comes back later in the season as all of the Sailor Guardians have a revaluation of “Oh that’s right I used to dream of Pegasus, I guess I just forgot”. We still have a lot to learn about the mysterious Pegasus and because of how Sailor Moon SuperS plays out, it will be a really long time until we get answers to any of the questions we have about him. 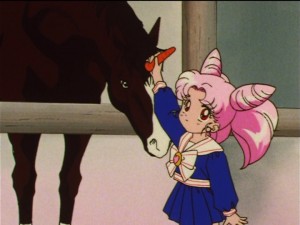 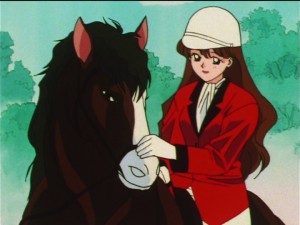 12 thoughts on “The first two episodes of Sailor Moon SuperS, episodes 128 and 129, are now available on Hulu”