As with every Monday two more episodes of Sailor Moon R have been added to Hulu and Neon Alley. The episodes are in Japanese with English subtitles by Viz. This week we get a glimpse of things to come and then dive right into some filler with episodes 75 and 76. Having previously seen mostly Rubeus and the Ayakashi sisters we’re now getting a look at Esmeraude, Diamond and Saphir of the Black Moon Clan. 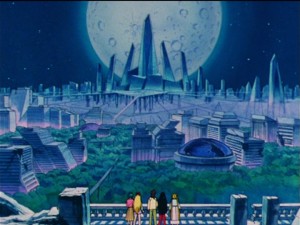 Episode 75, The Mysterious New Guardian: Sailor Pluto Appears, gives us a better look at Sailor Pluto and Crystal Tokyo. We still don’t see her in the flesh but she communicates with the Sailor Guardians through Luna P. Previously Chibiusa had been seen communicating with her through Luna P’s eye but the image we saw of her was heavily pixelated to the point where her identity remained hidden. Chibiusa has fallen ill and so the gang must travel into her mind to fight off this manifestation of the Dark Crystal. Although they are in Chibiusa’s mind, it looks like 30th century Crystal Tokyo. Shocked at how terrible it looks Rei reassures them that it just looks bad because it’s a nightmare in Chibiusa’s mind. Um… actually that’s pretty much exactly how Crystal Tokyo looks in the future. It’s a real mess. Chibiusa is actually pretty spot on. Sailor Moon fights off the monster that really isn’t a monster and in the process is able to make Chibiusa fly. So is this a real move or something she can just do because she’s in a crazy dream world where anything goes? Not really clear. In a most ridiculous scene the girls see Chibiusa’s mom lying asleep. They are quite aware that it’s Chibiusa’s mother but Sailor Moon is completely incapable of noticing that she is wearing a dress that’s nearly identical to the one that she wears. The whole gang generally shrug off everything important about this dream as being irrelevant because it’s simply too early, plot wise, for them to have been exposed to this information at this time. 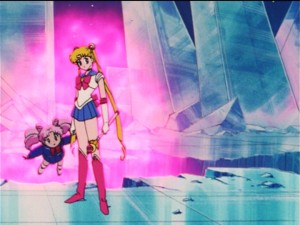 Episode 76, Magic of Darkness: Esmeraude’s Invasion, finally gives us a proper look at Esmeraude as the new villain. She’s been kicking around for a handful of episodes but hasn’t actually done anything. Now that we’ve gotten a few plot episodes out of the way we can get right back into the habit of filler for a while! Esmeraude is great for that as she randomly targets spots to stick these Dark Henges into in order to make the future more vulnerable. This week’s plot is all about yummy deserts! The monster attacks people and covers them in various foods like donuts, cakes and frosting. When I was younger I had no idea what the monster’s name “Magipan” meant but it’s actually marzipan, a sweet confectionary. Not to be confused with marzipan castle from the Sailor Moon SuperS movie. Esmeraude laughs loudly and bickers with all of the girls, getting called old and making fun of their lack of hips and breasts. A good time was had by all. 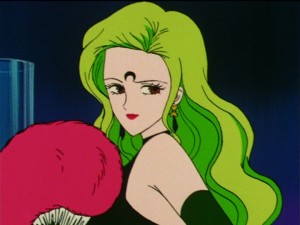 If you’re looking for the difference between this version and the dub which was released back in the 90s you should check out my reviews of episodes 75 (cached version) and episode 76 (cached version) from 1997 on the Sailor Moon Page of Funk!