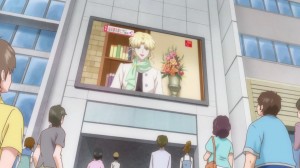 The Sailor Moon Crystal anime, which until now has only been available worldwide via online streaming services, will soon be broadcast on TV in Japan. This will not affect the show’s current streaming schedule. Little more information accompanied this news except that it would be airing starting in April of this year. No specifics about the time or channel have been announced. It is also unknown if this broadcast will include the original streaming version of the show or the home video version with small improvements to the art of many scenes.