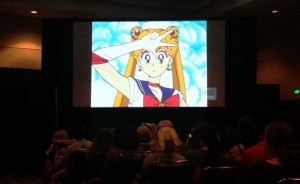 A 25 second clip of Viz’s new Sailor Moon dub has been leaked! This was recorded last weekend at Viz’s panel at Anime Expo where the new dub cast was announced. It features Usagi, as voiced by Stephanie Sheh, from the begning of episode 2. No other characters are present in this scene. Episode 2 was played first accidentally. Once this was noticed the audience was told not to record anything, so no more clips are available. Here’s a transcript of what is said in the clip:

I’m a cancer with blood type O. My birthstone is a pearl and I am a bit of a klutz. Some people might say I’m also a little emotional. So one day this strange cat named Luna appeared, turned me into a guardian in a sailor uniform and told me I had to fight bad guys. Boy does that ever make me nervous, but I’m sure it’ll all work out fine.