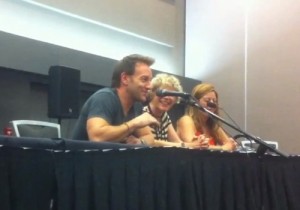 Throughout the panel a lot of insight into the recording of the episodes is given. Vince Corazza even mentioned recording from 15 to 20 episodes on some days.

When the topic of the new 2013 show’s potential dub came up Katie Griffin mentioned being hopeful she would be asked to return to the new show and Vince Corazza added that it would be a lot of fun for all of them to do it. That being said nothing has been determined with regards to the casting of the dub though as Katie mentioned if they wish to keep costs down doing it in Canada would be wise so there’s a good shot some of the old actors will return.

Mars/Tux shippers can be pleased that Darien’s voice actor Vince Corazza thought Sailor Mars was the “sexiest”. Unfortunately Katie Griffin preferred Chad to Darien and hoped her character Raye would end up with him.

We’ll be sure to post the other panel, which featured all 6 guests, if and when it becomes available.