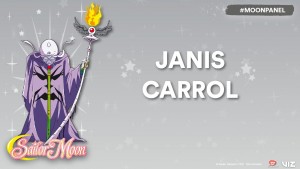 Yesterday was Sailor Moon Day at Anime NYC. This included Viz’s Moon Panel, as is often the case with conventions Viz attends. The main thing announced at this panel was that Sailor Moon SuperS would be released on April 10th but we also learned about a new voice acting credit! Janis Carrol would voice Zirconia! That’s great! So who exactly is Janis Carrol? I saw some fans saying how happy they were to see her get the role as she had the perfect voice. This wasn’t a name I was familiar with but I actually was familiar with the actress. Janis Carrol is an alias for veteran screen and voice actor Barbara Goodson known best to many fans as the voice of Rita Repulsa from Mighty Morphin’ Power Rangers. Note that she only provided the English voice for that character. The actress who portrayed Witch Bandora in Zyurangers, which was adapted as Mighty Morphin Power Rangers, was Machiko Soga who sadly passed away in 2006. 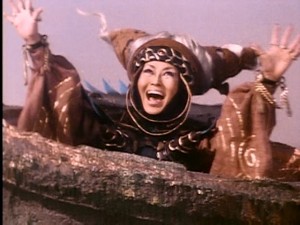 IMDB redirects searches for Janis Carrol to Barbara Goodson’s page. Why? Browsing through her credits we see the name Janis Carrol listed for a number of other Viz Media titles including Jojo’s Bizarre Adventure. IMDB recognizes that this is another name she uses and redirects users to the appropriate page. Why, then, use this alias which isn’t all that well hidden for anyone trying to investigate? I don’t know for sure but some fans have speculated that this might have to do with union work. Some actors will have their name tied to a union and will use an alias for non union work. I don’t know if this is true in this particular case as I don’t know the specifics of how Viz hires their actors. There are many reasons for which a person may use an alias for certain jobs.

Barbara Goodson previously voiced a few single episode roles in Viz Media’s dub of Sailor Moon R. This includes the monster Falion, a lion Cardian who attacked Sailor Jupiter and her friend in episode 49, as well as the kindergarden teacher, from episode 52 when Minako was protecting a bunch of school children. IMDB lists both of these on their Sailor Moon SuperS page which has a Sailor Moon S Movie image because they’re a bit of a mess. This site used to have a different page for the English dub and it’s generally very difficult to distinguish casts from various dubs on the site.

Barbara Goodson has also provided the voice of a number of other anime characters throughout the years. I remember her mostly from the English version of the anime series Teknoman, originally called Tekkaman Blade, where she played Star as well as the voices of Doris in Vampire Hunter D and some voices in Akira. These were things I was watching around the time Power Rangers was on and I was amazed at how little she sounded like Rita Repulsa in these roles. 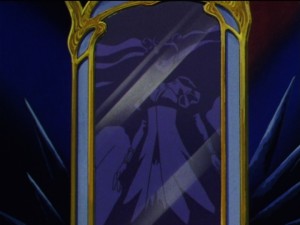 We still have not gotten any voice actor information for Queen Nehellenia who first appears in episode 148. Since Sailor Moon SuperS Part 1 only goes up to episode 146 that means we won’t actually be hearing Queen Nehellenia or the Amazoness Quartet in this release, which is likely why we have no voice actor information for them. Since Zirconia and Queen Nehellenia are similar characters, with Zirconia being interpreted as some sort of reflection or alternate version of Queen Nehellenia by some, it is possible that they will have the same voice actors. Since Barbara Goodson is able to portray a range of characters, having her do both roles would work quite well. This is certainly not guaranteed however as different voice actors have portrayed these two characters in other versions.