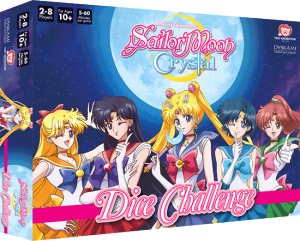 Earlier this year we mentioned that there were two Sailor Moon Crystal themed games coming out soon by Dyskami! The first, Sailor Moon Crystal Dice Challenge, is near release! A free promotional tournament is being held next weekend, on Sunday December 3rd, at The Boardroom: Guelph’s Game Cafe in Guelph, Ontario. The event will be limited to 48 players so be sure to show up early! It runs from 3pm to 7pm. In addition to being able to play the game fans who are dressed as their favourite Sailor Moon character will get a free copy of the game when it’s released! No specifics on how they will determine who exactly your favourite character is, but don’t tell me I didn’t warn you if you’re turned down for only wearing a costume of your second favourite character! 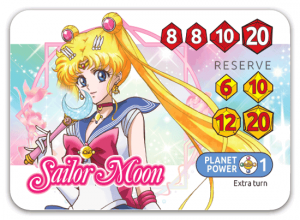 So when can we expect this game in stores? Dyskami Publishing posted an update to their Facebook Page mentioning that the reason for the delays were that they weren’t happy with the prototype they got from the factory they were dealing with, prompting them to look for a new factory. Current expectation is that the game will be available in stores in Spring 2018. As always we’ll have more information on the site as we get it. No indication of when the other Sailor Moon Crystal game, Truth or Bluff, will be available. By the original scheduled mentioned by Dyskami Publishing that game was to come out after Sailor Moon Crystal Dice Challenge and it appears that this is still the case. 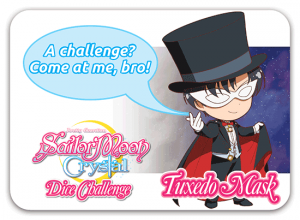 Details about the event can be found on the Eventbrite page. Will any of you be attending this event? While I’d love to make the 5 hour or so car ride to Guelph to attend I have this thing on the Saturday where I’m getting married so I don’t think I’ll be there.