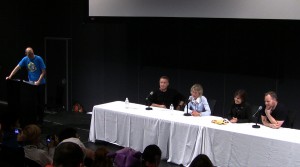 The panel focused on the cast’s time working in voice acting and featured a few attacks from the live action series. Though discussion of the new Sailor Moon anime was saved for the Sunday panel there were no new announcements made as no new information was available however the cast is enthusiastic to reprise their roles if given the chance and suggested fans on the Internet would have a lot of influence if they asked to see the original cast return. One such effort which I mentioned during the panel was this Facebook page which petitions to have Terri Hawkes voice Sailor Moon in the new anime. Please support this page and others if you’d like to hear your favourite voice actors in the new show.

Thanks to the Unplugged Expo staff for putting this convention together, to the Sailor Moon voice actors for making a great panel and to Kate for helping with the camera. Check out Kate’s Sailor Moon screenshots on Instagram or Twitter.