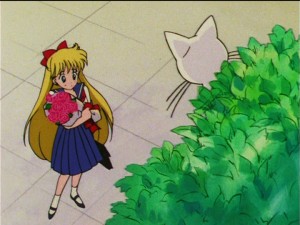 The two latest episodes of Sailor Moon S were added to Hulu and Neon Alley\ this morning. This week we look at two great romances in the series. First we have a look at Minako’s past as a volleyball player as her relationship with Artemis blossoms and then it’s Usagi’s birthday and she’s furious at Mamoru for not remembering it! 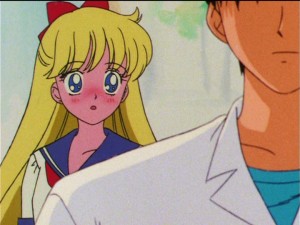 Episode 100, I Want to Quit Being a Sailor Guardian: Minako’s Dilemma, gives us a look at Minako’s past from even before she was Sailor V. The target this week is Tsutomo Asai, a classmate of Minako’s who she used to play volleyball with. She has a bit of a crush on him, and is a bit devastated to learn that although he used to feel the same way, he now has a girlfriend. Minako is troubled as she begins to miss her old simple life, before she had to start saving the world and such. She very briefly contemplates quitting being a Sailor Guardian, as the title suggests. Is this even an option? While fighting the Daimon of the week Minako does a signature volleyball move which Tsutomu recognizes. The lack of costumes fools everyone but you can’t hide volleyball techniques from a real pro! Following the fight he asks Minako to thank Sailor Venus, knowing fully well who Sailor Venus really is. He’s one of the few people in the series to learn a Sailor Guardian’s secret. 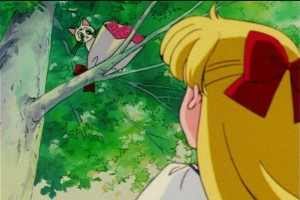 Minako is heartbroken by the episode’s events but then her true love Artemis appears in a tree, offering her flowers and inviting her to go on a date with her. She’s flattered at the proposition, and looks at Artemis with loving eyes finally jokingly answering that she’ll think about it. Is there any doubt that Minako and Artemis are one of the great couples of the series? 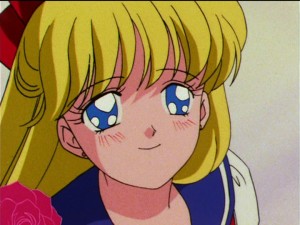 Episode 101, Usagi in Tears: a Glass Slipper for My Birthday, has Usagi celebrating her 15th birthday! Usagi is excited to see what Mamoru will get her for her birthday only he’s completely forgotten it! Actually it seems he never actually knew her birthday in the first place. Indeed back in the mid 90s there were no Facebook or Google Plus profiles to tell us when someone’s birthday is. We had to remember, or forget, when someone’s birthday is. I suppose Mamoru also doesn’t know his daughter Chibiusa’s birthday, as it also happens to also be on June 30th. Mamoru seems to get a pass when everyone realizes that Usagi never told him when her birthday was but in months of dating, and knowing each other even longer, it’s kind of shocking that he never bothered to ask something so basic. It’s not as if they had only been dating for a few days or weeks here. Usagi is upset and wants a glass slipper to make up for it, which she gets but it turns into a Daimon. Oops! Kaolinite manages to steal Sailor Moon’s Cosmic Heart Compact and then Mamoru gets frozen into a huge glass crystal. All hope seems lost until … À Suivre. 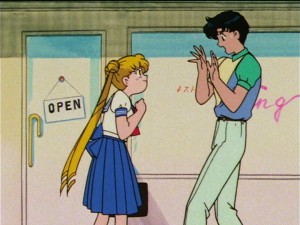 The time span of the anime, which aired over a 5 year period, is questionable at best. We don’t have a ton of indications of the passage of time aside from occasional mentions of Usagi’s age. She is mentioned throughout the first season, including the first episode, and in the Sailor Moon R movie as being 14 years old. In this episode Usagi celebrates her 15th birthday on June 30th. Later in Sailor Moon SuperS she states that she is 15 years old and then in the final episode of SailorStars, episode 200, she states that she is 16 years old. Throughout all of this every season appears to go through an entire year by going through all of the seasons making it seem as if 5 years pass in real time. In the Manga everyone ages 5 years but here in the anime it seems to be more like 2. 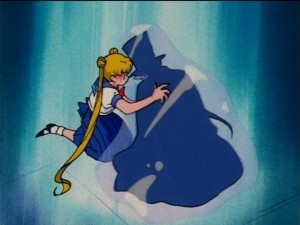