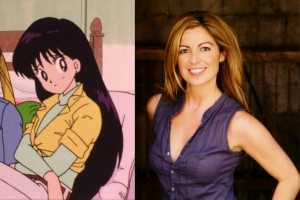 There are five panels featuring voice actors and staff from Sailor Moon.

Friday from 6:00 to 7:00 pm John Stocker will be part of the “Behind the Mic” panel which includes a few voice actors. This will take place in the Toronto Room.

Friday from 8:00 to 9:30 pm the panel “Ask an Anime Character” will include Linda Ballentine, Katie Griffin and Susan Roman as well as voice actor Trina Nishimura. This will also take place in the Toronto Room.

Saturday from 1:00 to 2:00 pm there are two panels taking place to compete for Sailor Moon fans’ time. John Stocker will join others in the “So Many Voices” panel in Plaza C while Linda Ballentine, Katie Griffin and Susan Roman will be doing the “Memories of the 80s” panel in Toronto Panels.

Saturday from 5:00 to 6:00 pm will be the “Sailormoon Voice Actors Q&A” in Toronto Panels. The guests are not mentioned by name in the schedule but I think we can take a guess at who might be in attendance.

In addition to these panels various autograph sessions will be taking place throughout the weekend where you’ll be able to meet your favourite Sailor Moon voice actors.

There will also be two fan run panels about Sailor Moon at the convention.

Saturday from 6:00 to 7:00 pm the “Sailor Moon Industry & Merchandise” panel will be held in Halton Panels.

There are also two Sailor Moon cosplay photo shoots taking place at TCC2. The first is Saturday at noon and the second is Sunday at 3pm.

The convention is still over a week away so there’s always the possibility of last minute schedule changes but we’ve done our best to present the most up to date information that is available.