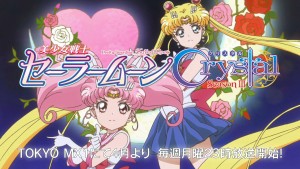 March 6th was the sneak preview of the first episode of the upcoming Infinity Arc of Sailor Moon Crystal, which will be aired on Japanese TV on April 4th. This was, we are supposing, Act 27, Infinity 1 – Premonition. Every episode to date has lined up with the chapter titles from the manga but it seems this trend will not continue. Two people who attended the premiere episode have confirmed that it only covered half of the manga equivalent of Act 27. Twitter user @uiyoe16 first mentioned that this only covered part of the story but later a user Andy added a comment to one of our posts with a lot of details.

According to her the episode concluded after Sailor Jupiter and Venus defeated the Daimon which had come from the Infinity Academy Students’ backs. This means that the first episode would only include appearances by Haruka and Michiru, but not their Sailor Guardian counterparts Sailor Uranus and Neptune or Hotaru, all of whom show up towards the end of Act 27. By my count this means the episode covers pages 4 to 43 of the manga chapter, which goes up to page 73. This is a bit more than half, but close enough that the next episode would likely conclude Act 27.

Many users have also wondered if this could mean that, unlike the first two seasons, we could be having more extra scenes and character development not in the manga. Part of what set the original Sailor Moon anime apart from the manga was that, over a longer period of time, we got extra content exclusive to that series. Andy goes on to say that they did not change anything or add new scenes not present in the manga. This would mean that, even though we may not be doing the 1:1 ratio of manga chapters to Sailor Moon Crystal episodes, we might not necessarily be adding anything completely new. This just gives us the same story animated at a different pace. Many comments have pointed out that the stories in the Infinity arc are often longer, so this kind of approach makes sense rather than trying to cram more story into a short episode. How this will factor in throughout the season is not clear at this point, and we will only get an idea as the story goes on, though we can imagine longer stories may have more than one episode while shorter ones may keep the 1:1 ratio.

@NickGreeley the ep only contained half of act 24 from the manga but the new transformations and attacks were much better.

greetings to all Sailor Moon Crystal fans! I was one of the fans who had a chance to see the limited premiere of the third season and I want to share some news with you, although I know some news have already leaked out. So first at all – at that time there were no new opening and ending credits, they said they are still working on it, same with the new soundtrack – what we could hear were just unfinished samples. The transformations and attacks have brand new animation – and it is stunning, much more better than in the first two seasons, Guardians also have new Planet Power make-up pens! The episode was simply a half of “Act 27 – Infinity 1, Premonition”, they did not change anything and there was not any new scene which is not in manga, it was 100% faithful to the manga and ended after Jupiter and Venus destroyed on the street the monster which emerged from one of the Infinity Academy student’s back. There were not present Sailor Uranus and Sailor Neptune (their civilian form Michiru and Haruka were present of course), Professor Tomoe, Hotaru, nor Witches 5 and only a brief appearance of Kaolinite and Pharaoh 90.

How many episodes will we have? There are actually different numberings for Manga chapters in different editions. Sailor Moon Crystal had broken up episodes according to the new version of the manga which were reprinted in 2003. These are the chapters used in the latest English release of the manga. According to this numbering the first two arcs spanned 26 episodes and there are 11 chapters in the Infinity arc. It looks like the Infinity arc would at least cover 12 chapters if they only broke up the first Act but more likely would be closer to 20 or 26 for this story arc alone if they kept up this pace throughout the Infinity story arc. While it was originally expected that another batch of 26 episodes could cover both the Infinity and Dream arcs of the manga, this may no longer be the case. At this point I’m considering that the next Act will be Act 27, Infinity 1 – Premonition, but what will Act 28 be called if it doesn’t span Act 28, Infinity 2 – Ripples, of the Manga? We may not have specifics until April 4th when the episode airs, or some short time after that as we still have no details about international streaming options. 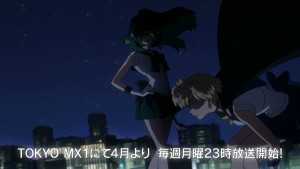 Source: @ukiyoe16 and the comments at Sailor Moon News