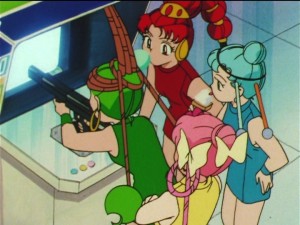 This week on Sailor Moon SuperS we are introduced to the Amazoness Quartet as episodes 150 and 151 are added to Hulu and Neon Alley. First the Dead Moon Circus, which arrived in town over 20 episodes ago, arrives in town? and then Ami has an Internet romance with a young musician.

Episode 150, The Amazoness: Nightmare from Behind the Mirrors, introduces us to the Amazoness Quartet. Last week I mentioned that not much had happened this season and this episode reminds us of that. There is a circus in town! The Dead Moon Circus. That damned tent showed up out of nowhere during the eclipse in episode 128 and we’re only now getting around to addressing it? Nehelenia, this season’s main villain, is seen only briefly in a mirror at the beginning of this episode. Better late than never! I am kind of joking when I say that nothing has happened yet this season, but the Korean dub actually skipped everything up to this episode and just had to insert something about the Super transformations into the fight to make it all make sense. Anyway, the Amazoness Quartet are kind of cool. CereCere, VesVes, JunJun and PallaPalla are terribly behaved young girls. They not only argue with Zirconia but CereCere tries to actually fight her, which only ends because Zirconia turns out to be more powerful. As villains they are less objectionable than sleazy pick up artists and seem to fit with the whole circus theme more as they do acrobatics. The target this week is Momoko. Again. But there isn’t much focus on her as she just sort of tags along with the gang to go to the circus. The Amazoness Quartet aren’t quite as invasive in getting the Mirror of Dreams from their targets as they do so by knocking a pool ball into them, usually after doing some sort of elaborate trick shot. The episode closes with the Amazoness Quartet getting massaged which is a testament to their slacker attitudes. 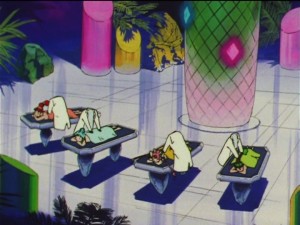 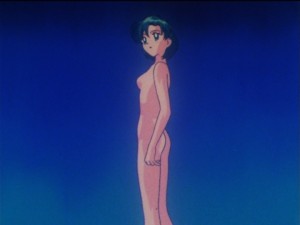 Episode 151, True Power Explodes: Ami’s Melody of the Heart, is the episode where we see Ami naked. Ami was chilling on the Internet before it was cool! Remember that this episode was released nearly 20 years ago, in November of 1995. The Internet wasn’t what it is today back then. Ami is downloading music on a computer network almost 4 years before Napster! She downloaded some music by user N. T. and is so into him that she’s writing poetry inspired by his music. Ami meets up with N. T. who is actually Toshiyuki Nishino, a young piano player who, much to Ami’s disappointment, has a girlfriend named Kyouko! Note that the initials N. T. apply because in Japanese the family name comes before the given name when stated, so he would be Nishino Toshiyuki. Then we get into this whole Ami powering up to Sailor Mercury thing. During the fight we cut to a scene with a fully naked Ami which should make some fans happy. She talks to Sailor Mercury, which is odd since Ami and Sailor Mercury are never before shown as being different people, and this causes her to do some kind of awakening. Why are we doing this? Pegasus powered everyone up a bunch of episodes ago. Now we are making every character do some sort of episode centred on them so that they can embrace their new powers. Another sign that we could have completely skipped the first half of the season and just started with episode 150 and using these sort of special episodes as reasons to power everyone up one at a time. Perhaps Ami just talks to herself because she has no family, as we learn briefly about her dead beat father who isn’t around and sends her a painting. 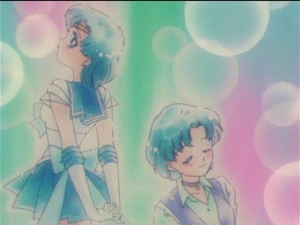 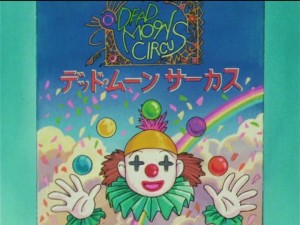 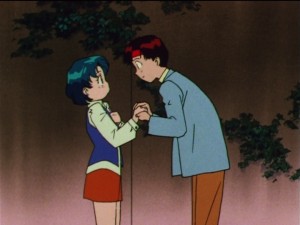