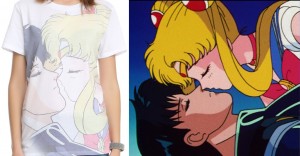 Hot Topic’s most recent “Sailor Moon Kiss Girls” shirt features a romantic kiss between Sailor Moon and her love Tuxedo Mask, as Endymion, but there’s a catch! The image on the shirt is from the final episode of the first season and is turned on it’s side, as can be seen from the way Sailor Moon’s hair is falling. She’s leaned over Endymion that way because he’s just died after his battle with Sailor Moon and then Queen Beryl. Usagi does not actually kiss him in this scene. She avoids doing so out of respect for her friends who were themselves denied the chance to kiss the boys they were in love with because they had died.

This is hardly a first for Sailor Moon fans. The Sailor Moon R movie features a scene where Tuxedo Mask kisses a dead Sailor Moon. He does so to give her the nectar of the Kissenian flower in order to revive her. This image, one of the few kisses shown on screen at the time, has seen widespread use by those who seemingly don’t know or care that the characters portrayed aren’t both alive. A simple Google image search for “Sailor Moon kiss” reveals quite a few instances of this image and reproductions of it.

Order this romantic shirt from our Amazon store to support the site: 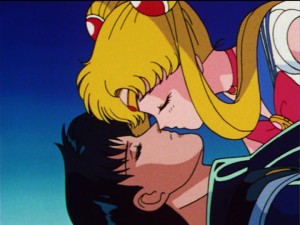 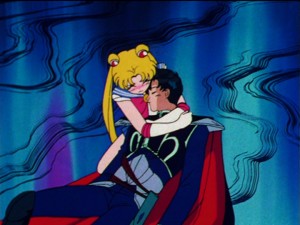 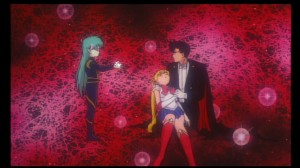