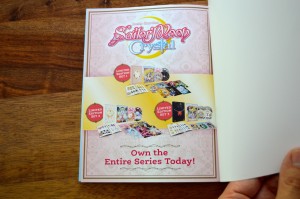 Own The Entire Series Today!

Another reason for not using the Sailor Moon Crystal name may simple be to reach a broader audience with the film. The original Sailor Moon anime was a massive phenomenon and having the Sailor Moon films attached to that series was just good business sense. I don’t think Sailor Moon Crystal is anywhere near as popular in Japan or internationally. Tying the movie’s branding too much to the Crystal title may attract the fans of the series who are almost guaranteed to see the film anyway, but what about the hordes of other Sailor Moon fans who spend massive amounts of money on merchandise and events but don’t really care much about Sailor Moon Crystal? You tell them there’s a new movie called Sailor Moon Eternal in theatres and they may be more likely to check it out than if it was clearly tied in to the Sailor Moon Crystal series.

Finally there’s the fact that it’s been over three years since we saw any episodes of Sailor Moon Crystal and this could be four by the time this movie is released in theatres. Some fans may be moving on from the franchise with new ones coming in, especially if the goal is to target a younger demographic.

As I said, this is all a lot of speculation on my part. I can’t say for sure why they aren’t using “Sailor Moon Crystal” anymore. I don’t really think the series is over, as my intentionally alarming title might suggest, but this is certainly a conclusion some of you may feel the need to jump to! What do you think?