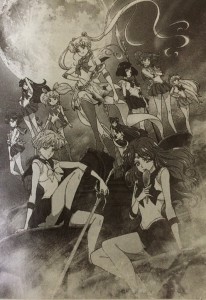 A black and white photo has been circulating online showing art which some claim to be official art of the upcoming new episodes of Sailor Moon Crystal. This image shows the full group of Sailor Guardians including the never before seen Sailor Uranus, Neptune and Saturn. Sailor Moon is also in her Super Sailor Moon form. The image a photo from what appears to be an authentic Japanese magazine. Since it was not posted by an official source I can not guarantee the authenticity of this image though the style appear to be consistent with the art style of Sailor Moon Crystal. That said many fans have been able to produce art in this style. There is always the possibility that an image like this is a clever hoax. 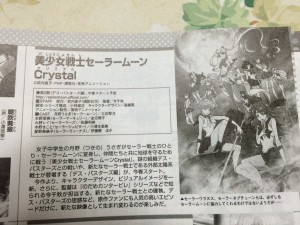 These two photos can be tracked back to Twitter user @karaage_hata who first posted the magazine photo and later the close up version.

21 thoughts on “Art from a Japanese magazine seems to show Sailor Moon Crystal’s versions of Sailor Uranus, Neptune and Saturn”