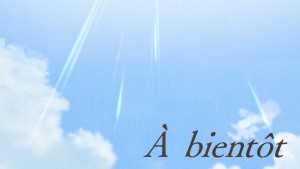 The final episode of Sailor Moon Crystal, Act 26, Replay – Neverending, was available this morning on Crunchyroll, Hulu and Niconico. There has been no confirmation of any episodes beyond Act 26 to date as fans continue to hope for some kind of announcement of more episodes. No next episode preview appeared where it usually does and instead of the usual “À suivre” or “To be continued” message we instead saw “À bientôt”, French for “See you soon”.

It’s unclear exactly what this means. The ideal case of course would be that this means we will be seeing more episodes at some time in the future. It could also simply mean that we will be seeing more of Sailor Moon in various ways, through products, the musical and other ways which are already being released all the time. This may also be a reference to something new and unexpected. A new movie, special or something else we simply aren’t expecting.

There’s not much to go along with this. A tweet from this morning on the Sailor Moon official Twitter account simply mentions that the latest information will be announced at the official site. That is generally the main place we expect any big news to come from, as opposed to the smaller international sites and sources which are often referenced as evidence for a second season.

For now we wait and hope for some official announcement. What do you think this message means? Are you remaining optimistic?

32 thoughts on “Will Sailor Moon Crystal return? What is the meaning behind the cryptic final message “See you soon”?”