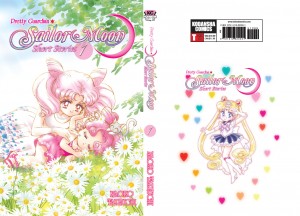 This first book collects Chibiusa’s short stories as well as some other side stories related to entrance exam preparation. The second book’s main story is the story of Princess Kaguya, which was later adapted as the Sailor Moon S movie. It also includes a story about Rei’s past and Parallel Sailor Moon, a look at a possible future which includes the daughters of all of the main characters.

I wish I had some photos of the book to share but there don’t seem to be any copies stocked at any Chapters, Coles or Indigo locations in Ottawa. Included is an image from Kodansha’s tumblr page. The cover art features Chibiusa, Chibi Chibi and Diana. The back of the book features Princess Sailor Moon, a character from the live action series who has never made an appearance in the manga.

As always these and other products are available for purchase through the Amazon links on the left sidebar of the main page. By using these links you support this site which we greatly appreciate.