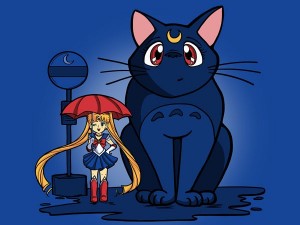 This “My Neighbor Luna” shirt, which is a mash up of Sailor Moon and My Neighbor Totoro, is for sale today at Tee Turtle for $12. TeeTurtle works a bit differently than other daily shirt sites in that the shirt will not be pulled after a day but instead will go up in price to $15 for the rest of the week and then up to $20 afterwards.

This shirt was previously sold in May at The Yetee. The artist is Karen Hallion. Check out her Facebook page or deviantART page for more of her stuff. 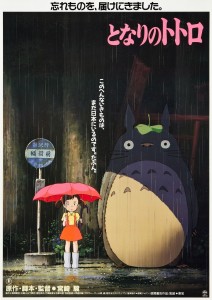 The shirt is very similar to this rather iconic My Neighbor Totoro poster. Note that the poster features only one girl, as opposed to the scene in the film which has Satsuki waiting for the bus holding Mei on her shoulders. This girl is taller and clearly older than Mei but shorter than Satsuki. She has pig tails, different from Satsuki’s shorter hair style. She’s actually a mix of the two characters from an earlier time in the movie’s development when there was only to be one girl. How this image remained in use as one of the film’s main posters and the cover of the recently released North American DVD and Blu-Ray is a bit of a shock to me considering it features a character that does not exist by the film’s canon. All of that has nothing to do with this shirt though. Buy the shirt and buy My Neighbor Totoro while you’re at it. It’s a great movie, even if the cover is nonsense.