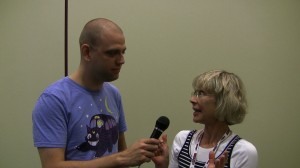 Last weekend at Fan Expo 2013 in Toronto I caught up with Susan Roman for the following interview. She supplied the voice for Sailor Jupiter for the English dub of Sailor Moon.

I’ve received a lot of question about the shirt I’m wearing. This “Lunar Express” shirt was sold on The Yetee earlier this year. It was a limited time sale but it can still be bought from RedBubble. The shirt’s artist is Machmigo.