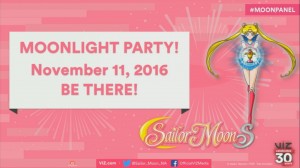 It’s important to note that Hulu has changed their service, restricting content to paid users. Viz’s complete Sailor Moon library is now available to stream for free on Yahoo! View. We might expect to see any new dubbed episodes of Sailor Moon S on that service as well. Sailor Moon episodes remain free to watch on Viz’s streaming service Neon Alley. This really applies to Americans. Canadians won’t be able to view any of these services and we’re not bitter about it at all!

Keep in mind that this is all speculation on my part. We may be getting the lamest Moonlight Party to date and not having any episodes released! This would be completely uncharacteristic of other releases which is why I’m choosing to jump to the conclusions I am. Viz did state that this Moonlight Party would be “a little different” so this might mean “a little terrible” so take what I’m saying with a grain of salt. I’m not one to post unfounded rumours which is why I’m presenting you with all of the information and allowing you to draw your own conclusions. We will almost certain receive more specifics about this event prior to November 11th. One way or another I’ll shared those specifics on the site as we learn them.