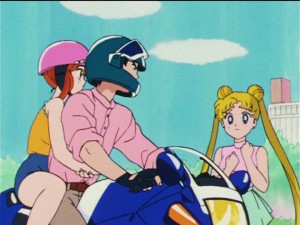 The two latest episodes of Sailor Moon R are now available on Hulu and Neon Alley. This week we get episodes 69 and 70, both of which deal with unhealthy relationships and how not to treat your partner! 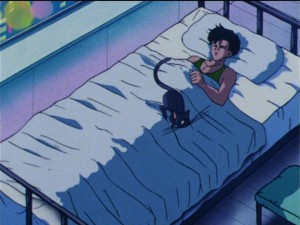 Episode 69, Awaken the Sleeping Beauty: Mamoru’s Distress, gives us a better look at what’s been keeping Mamoru and Usagi apart. We once again see a flash forward to Usagi and Mamoru’s wedding but this time we see what has Mamoru concerned. It’s actually a prediction of doom! Dump her or she’ll die, basically. A tough situation. What’s a good guy to do? Sort of forced conflict which if there’s a good reason for it, makes a lot of sense, but we’ll learn later on just how stupid the reasons really are. So Mamoru knows just how to make Usagi know it’s over, that’s to make her think he’s with another girl! Enter Motoki’s younger sister Unazuki. When Usagi sees them on a bike together she is pissed, which sends her into an eating binge. This is some pretty real stuff, dealing with your problems by crying into an open fridge. The monster, who by chance comes along at the right time in Usagi’s life, plunges her into a dream where she is all chibi. Luna, who is all over it, figures that Mamoru’s kiss might get her out of this for some reason, as she can tell that Usagi is upset about something he’s done. She then jumps into his apartment and jumps onto his penis to wake him up (animated gif included below). He kisses her, she’s fine, everyone’s happy. Well not really at all. Mamoru and Usagi are still split up until further notice, so that’s kind of crappy. 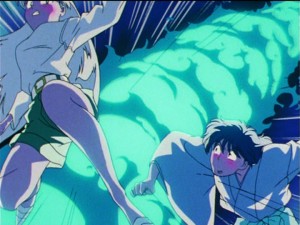 Episode 70, Battle of the Flames of Love! Mars vs. Koan, covers two abusive relationships. The first is Koan and the horrible Rubeus. He’s completely terrible to Koan, threatening her and ultimately tossing her life away as if it were nothing. Rubeus isn’t terrible because he’s evil and wants to destroy Crystal Tokyo. It’s because of the way he treats women. This is very real horrible behaviour that is a real problem in our society, not some fantastical caricature of what a bad person might be. The other abusive relationship is Rei and Yuuichirou! At the beginning of the episode he’s carrying around her bags like a lap dog. She generally mistreats him for most of the episode, and it’s played up as a bit of a joke. It’s funny but this is kind of terrible. Rei isn’t all bad in this episode, as her behaviour with Koan shows the real strength of the show. Koan is trying to do evil at the Hikawa Shrine, again. It’s a Crystal Point after all. When the fighting starts Rei realizes that there’s good in Koan, and while the Sailor Guardians are attacking her she comes to her defense, putting herself in harm’s way to protect her, getting hit by Sailor Jupiter’s knee. Ultimately when Koan had all but given up and was ready to give her own life and killing her off seemed like an easy option, Sailor Mars wouldn’t have it. The real strength of Sailor Moon and it’s characters is not in their ability to harm someone, but in their compassion and willingness to help even an enemy. Koan is then healed by Sailor Moon’s crystal and is able to return to a normal life, all thanks to Rei. Similar transformations will be seen with the rest of the Ayakashi sisters in the coming episodes, but Rei really set the precedent for this behaviour. With all this considered, we can forgive her mistreatment of Yuuichirou. 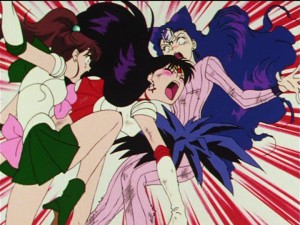 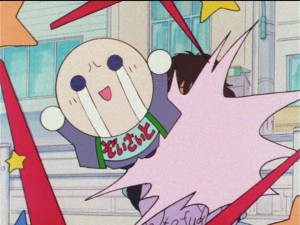 There are a couple of odd references in this episode. This is actually the final appearance of Zoisite, who actually died back in episode 35. He is seen in a single frame of animation as Koan snatches her bag back from Yuuichirou. Later at Rei’s, Usagi is seen reading reading what looks a lot like a Run Run magazine featuring Sailor V and Artemis on the cover. This isn’t that odd since it’s well established that Sailor V is an anime, manga and video game in the Sailor Moon universe, but seeing a real world manga in the anime is a bit weird. 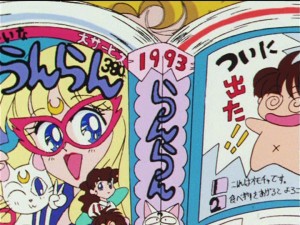