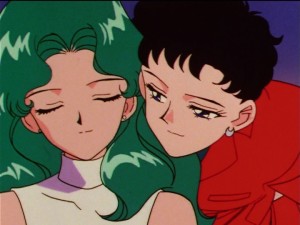 The two latest episodes of Sailor Moon Sailor Stars were (probably) added to Hulu and Neon Alley this morning. This week we get episodes 180 and 181 which are all about Seiya! First we ship Seiya and Michiru, then Seiya and Haruka and then of course it’s all about Seiya and Usagi. 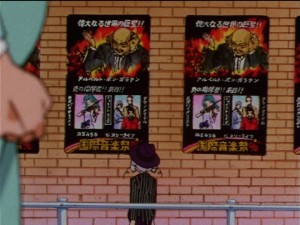 Episode 180, Brightness of Calling Stars! Haruka and Michiru’s Entry into Battle, brings back the absentee Haruka and Michiru! These two aren’t in Sailor Stars much because apparently they’re hanging out with Hotaru and Setsuna, who are nowhere to be seen in this episode. Michiru is performing a concert with the Three Lights which the girls want to go to and they are trying to phone in to buy tickets rather than the obvious solution of asking the girl who is performing in the concert if she could score them some tickets, you know for old time’s sake since they saved the world together and because thanks to Usagi their pseudo adoptive daughter who there were trying to kill is actually still alive. Michiru comes through with the tickets because that’s what you do when you’re in a superhero team with someone. The girls go to the concert, scheduled for July 13th 1996. We don’t often get years so this is a nice benchmark. Sailor Iron Mouse almost figures out who has some Star Seeds in a very comical scene! She’s starring at a poster which includes Michiru and the Three Light and determines that the Star Seed must belong to… the conductor on the poster. The show is kind of poking fun at one of my silly gripes with Sailor Stars at this point. In all other seasons the Sailor Guardians all got targeted in episodes but now for some reason no one with a Star Seed is actually having their Star Seeds removed. Well none that we’ve confirmed anyway. The concert is cool and then we ship Seiya with everyone! First Michiru asks him to help her out of her dress, which is not at all subtle. When Haruka walks in on this she tries to punch him, which is just full of sexual tension. Fighting ensues as Mr. Underpants has his star seed stolen. After the fight it looks like Sailor Moon and Sailor Star Fighter are about to become friends but then Sailor Uranus turns their hands shaking into a World Shaking. Same old. Sailor Uranus and Neptune don’t want anyone to be on the same team or be friends. They protect Sailor Moon from enemies from outside of the solar system, which is why they got involved in Sailor Moon S. Since the Sailor Starlights are also from another solar system, they are not allowed to play with the good guys! Forced drama! Oh well. 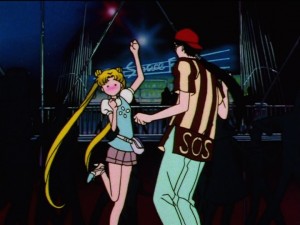 Episode 181, Seiya and Usagi’s Nervous Date, is all about shipping Seiya and Usagi. Seiya wants to do something on his day off and decides to invite Usagi to come along for the fun. She doesn’t seem to realize this is a date and feels quite guilty about the whole endeavour. At one point she even thinks Seiya wants them to have sex, but he’s really just talking about dancing at a club. Oops! Sailor Iron Mouse is desperate at this point. She’s avoiding Galaxia and even hangs up on her! She has the bright idea that maybe the Three Lights have true Star Seeds, but when she tries to get one from Seiya he dodges the little bracelet thingy and flees. Ultimately Galaxia shows up and retrieves Sailor Iron Mouse’s bracelets, which kills her. We’ll learn more about the nature of these much later. For now lets mourn the loss of one of the coolest villains in the series, though the rest of the Sailor Animamates are cool too so we have something to look forward to. In true villain fashion Sailor Iron Mouse is killed right as she figured out who to target. If I’m ever a super villain I will always let my minions finish their sentence before I kill them. “But Adam I figured out who has the sacred amulet we’ve been searching for.” “Oh okay. Well tell me and I won’t kill you.” “It’s Ted.” “K. Thx.” *murder* While fighting, Sailor Moon sees a small bear toy that Seiya had and says his name, which causes Sailor Star Fighter to realize that Sailor Moon is actually Usagi. Good job Seiya! 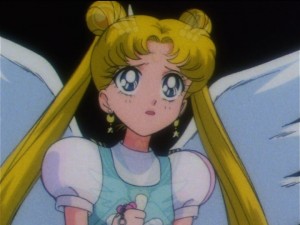 Note: This is scheduled to be posted as I am sun bathing in St. Lucia. It was written last week. I’m assuming Viz went ahead and released these episodes on Monday as they always do. The episode titles I put may not match the translation Viz decided to go with. I usually add the titles and episode links before posting, though my screenshots come from my Japanese DVDs so much of this post is what it would have looked like anyway. I will fix up the links and titles once I return to the frozen wasteland that is Canada around February 8th. 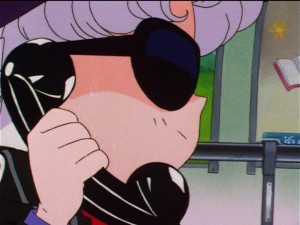 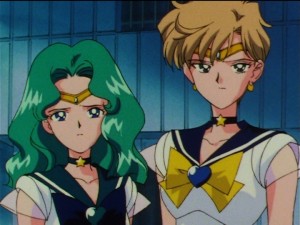