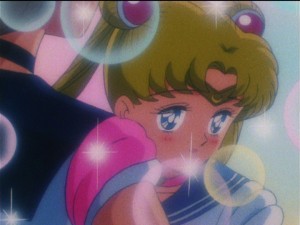 The two latest episodes of Sailor Moon S are now available to stream on Hulu and Neon Alley. This week Mamoru’s two main love interests are shown to be attracted to other people, first as Sailor Moon is attracted to Sailor Uranus and then as Rei is attracted to Haruka and to a lesser extent Yuuichirou. 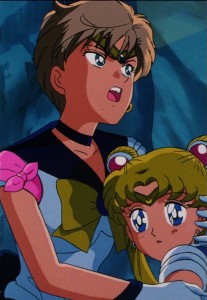 Episode 98, To Save Our Friends: Moon and Uranus Join Forces is all about shipping Usagi and Haruka. The target is some motorcycle guy but we don’t care about him. Haruka does dirt biking and gets targeted by some thugs. This, combined with Usagi missing a bus, is a good excuse to have them ride a bike together and share some romantic moments. Once conveniently separated and transformed, Michiru falls into a waterfall leaving them together and alone, again. To make things even more intimate the Diamon ties them together with handcuffs, leading to great intimacy. The two hide in a cave where they do a little bonding, do a little scratching and then do some hugging. Sailor Moon notices that Sailor Uranus has a sent very similar to Haruka’s, but this moment of enlightenment is interrupted once again by the enemy. Unimportant monster fighting follows. 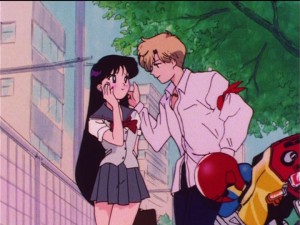 Episode 99, A Man’s Kindness: Yuichiro Heartbroken by Rei, continues the abusive relationship between Yuuichirou and Rei! Rei is seen flirting with someone who Yuuichirou believes to be a handsome man but who is actually Haruka, a handsome woman. He is heartbroken by this and no one really does anything to clear things up as he decides to leave town, knowing he can not compete with such an attractive man. He almost boards a train but it happens to become a monster at the last moment. The episode wraps up with Rei and Yuuichirou not really getting together once again! So this episode has some Rei and Haruka shipping and some not quite so satisfying Rei and Yuuichirou shipping. A song not included in any Sailor Moon soundtrack is played while Yuuichirou is leaving. This is a song from 1977 named Azusa Nigou by the band Karyudo. 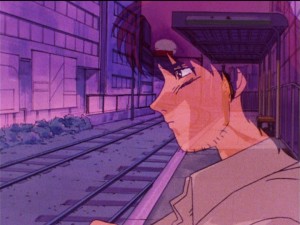