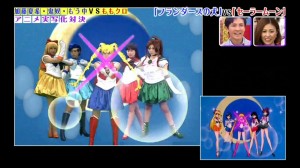 Unfortunately today’s appearance of Momoiro Clover Z on Japanese TV show Bakusho Show Battle did not have them performing the theme song to the new Sailor Moon 2013 anime as we previously reported. This was not an April fool’s joke but rather a misunderstood translation of the Japanese announcement. Apologies if we got your hopes up.

What we did get is a shot for shot remake of the opening of the Sailor Moon S season of the anime in which Momoiro Clover Z sing Moonlight Densetsu. You can watch the full clip below, assuming this clip does not get pulled as others have. You can compare their version to the actual Sailor Moon S opening being shown on the lower right corner of the screen.

Bakusho Show Battle is a Japanese TV show in which bands square off against each other doing a parody of a popular intro. You can find out more about this episode from Yahoo! Japan’s episode guide. 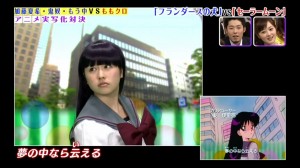 Readers may also notice that this version sounds a bit better than what was sung at the 20th Anniversary Event last summer. This is no doubt due to the fact that there was more time to rehearse and perfect this in the studio with the help of editing and maybe a bit of auto tune. 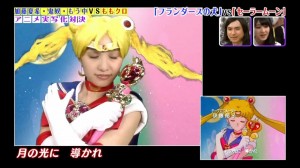 For now we still don’t know what the theme song will sound like but hopefully we will be getting that and more news about the 2013 Sailor Moon anime real soon. 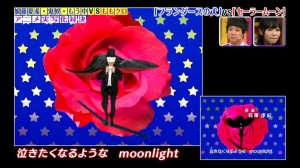 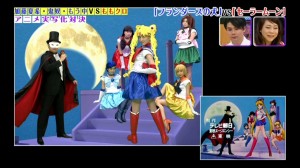 Note that this is the first opening for the Sailor Moon S season. As the season went on and more characters joined the show they were added to the intro. The original intro is included below for reference. This version of Moonlight Densetsu is sung by Moon Lips who’s rendition of the theme was used for Sailor Moon S and SuperS, replacing the version sung by DALI which was used for the first two seasons.

Thanks to Moon Chase for finding out information about this show.