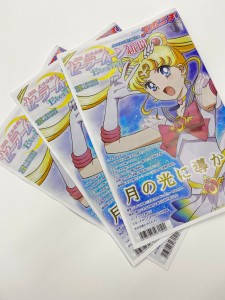 A Sailor Moon Eternal magazine is coming out in Japan tomorrow which is actually soon because tomorrow in Japan is actually a bit later today! This 32 page full colour magazine will be sold in stores in Japan and online. The catch? There’s a different cover for the in store version and the online version! The magazine is fairly inexpensive, costing only 550 yen which is a bit over $5 US however ordering it online and shipping it outside of Japan will likely cost significantly more than that in shipping! I went ahead and ordered two copies from Amazon Japan because I was a bit annoyed at the prospect of spending almost three times more on shipping than on the cost of the item itself! 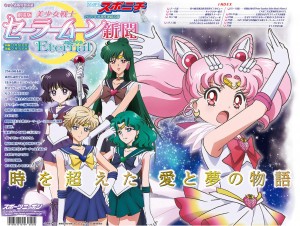 We can see from the index what is included. I can’t really read any of that, but here’s a decent estimate at what it says.

Thanks to saintfighteraqua from the comments for providing more detail on some of these! 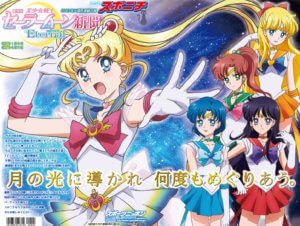 Sailor Moon Eternal Part 1 will be released in theatres in Japan on January 8th with Part 2 following shortly afterwards on February 11th. Though there has been no confirmation of a release outside of Japan there is evidence which suggests the movies will be streaming on Netflix at an undetermined date.