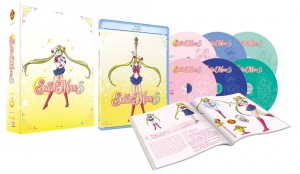 After waiting for an entire year we finally have some concrete details about Viz’s release of Sailor Moon S. This weekend at Anime Expo it was announced that the first part of Sailor Moon S is coming to home video on November 15th 2016. You can pre-order this set from Right Stuf Anime for $62.99 US. This first set will include episodes 90 to 108 of the series which is a few episodes before Hotaru first shows up. Box art seen above shows that this will look a lot like earlier releases and include a full colour booklet with a lot of art and other information about the series. This set will include the show both in Japanese and English dialogue with optional subtitles. This will have Viz’s new English dub of Sailor Moon S. An extended trailer showing many new English clips from the early episodes of Sailor Moon S have been released which you can watch below.

For a limited time pre-orders from Right Stuf will come with a collectible gold coloured coin showing Sailor Moon’s Cosmic Heart Compact, her transformation item during the S season of the anime. The set is exclusively available to pre-order from Right Stuf for now but it will be available from other retailers prior to its release.

Though no details about a Moonlight Party were mentioned, it seems likely that one will take place at some point to give us a sneak peak of some dubbed episodes of Sailor Moon S. This has typically been done before all sets are released as a way to advertise the upcoming release. We’ll be sure to share any information about such events or dubbed episodes being added to Hulu as we learn about them.